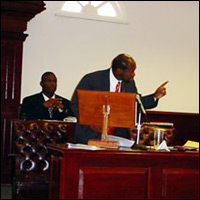 A commitment to extend pension coverage to Government Auxiliary Employees is one step further to becoming a reality.

Legislation to streamline and coordinate the appointment, terms and conditions of employment, discipline and dismissal of Government Auxiliary Employees, formerly known as Non-Established Workers, has been introduced and given its first reading in the St. Kitts and Nevis National Assembly.

Clause 4 of the Bill seeks to establish a Commission to be known as the Government Auxiliary Employees Commission.

Clause 5 of the Bill seeks to provide for the functions of the Commission, while Clause 6 seeks to make provision relating to the procedure that is to be followed in recruiting, disciplining, suspending and dismissing Government Auxiliary Employees.