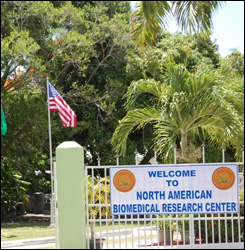 St. Kitts and Nevis’ Prime Minister the Rt. Hon. Dr. Denzil L. Douglas says the opening of the multi-million dollar North American Biomedical Cancer Research Center in St. Kitts is critically important as it provides the opportunity to make a tangible contribution in the fight against one of the serious non-communicable diseases that affect mankind in the form of cancers.

Noting the mission statement of “˜developing, promoting, fostering and sustaining the highest quality research and therapeutics in the field of cancer’, Prime Minister Douglas told the opening ceremony that it was a very critically important message that is being sent out from this center.

Prime Minister Douglas also referred to another section of the Mission Statement that “assures employees, students, patients and visitors of a safe environment through compliance with government regulations and good safety practices”.

“This therefore speaks to standards; it speaks to appropriate accreditation which is going to be critically important if we are to succeed in what we are seeking to do here in St. Kitts and Nevis as we impact the rest of the world in the area of biomedical research,” Prime Minister Douglas told invited guests and officials which included Governor General His Excellency Dr. Sir Cuthbert Sebastian; Deputy Prime Minister the Hon. Sam Condor; Senior Minister, Dr. the Hon. Timothy Harris; Minister of Education, Sen. the Hon. Nigel Carty; Governor General’s Deputy, Sir Edmund Lawrence; and Staff of the Windsor University School of Medicine.

Prime Minister Douglas is of the view that both current, as well as prospective students, interested as they already are in the field of medicine, will be particularly intrigued by the fact that their school will now be involved in bio-medical research and be listed among the institutions around the world, steeped in the research to tackle cancers.

He noted that the North American Biomedical Research Center is not the first institute for bio-medical research being established in St. Kitts and Nevis.

“We  have had two bio-medical research labs ““ one in the area of Mills’ Estate and the other in the Bouruyeau are which are using stem cells from primates to study not only the effects of stem cell research in the treatment of diseases like Parkinson’s Diseases but also in terms of monitoring behavioural research as a result of different chemical effects on the mind of primates,” said Prime Minister Douglas, joining Governor General Sebastian in cutting the ribbon to open the facility located on Victoria Road in Basseterre.

Reiterating that the opening of this center is an important step for Windsor University and also another important step for St. Kitts and Nevis, Prime Minister Douglas congratulated Dr. Gaddam and his hardworking team on this milestone “just one of many during your many years here ““ and to wish you and all of those who will advance the work of this facility, every success.”

“Areas of research include molecular and cellular mechanisms and genetic control of cell growth and differentiation. NABRC is focused on discovering and developing innovative peptide and small molecule therapeutics against cancer. Our expanding knowledge and understanding of disease mechanisms combined with our molecular biology and technology expertise, are leading us to more targeted therapies, and clinically differentiated products,” he said at the opening.

He pointed out that using the novel discovery platform, NABRC is building a strong pipeline of anti-cancer drug candidates.