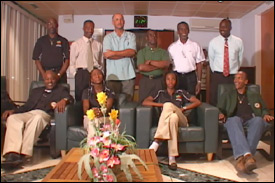 Olympians Meritzea Williams and Virgil Hodge were commended for their proud representation of St. Kitts and Nevis while being welcomed home by senior Government and athletic officials, friends and family.

The duo arrived on Tuesday evening after debuting at the Games of the XXIX Olympiad in China. Veteran Olympians Tiandra Ponteen and Kim Collins, who also went to Beijing, had other duties which prevented their immediate return.

Deputy Prime Minister Hon. Sam Condor, Minister of State for Sports Hon. Richard Skerritt, Vice President of the local Olympic committee Dennis “Freddie” Knight and President of the athletic association Raphael Jenkins were among the welcoming party that assembled in the VIP room at the R.L.B. International Airport.

“The theme for Independence this year is Pride, Development, Progress ““ Independence 25 Years of Success and “¦ you represent, 25 years of success,” he noted. “Nationhood and sovereignty is not about economic power, nor military might. It is about [the development] of human resources and that is what you represented for us in Beijing.”

Minister Condor said the local Olympians were “very good Ambassadors” and thanked them for their positive representation.

Minister of State Skerritt also saluted the athletes and encouraged them to stay focused.

“I think you understand that to be world class you have to continue working hard everyday. You have another Olympic Games in four years time and the [preparation] begins now,” he stressed. “I know that you have the dedication and you have the discipline and you have an exciting future ahead of you. We wish you all the best.”

“London here we come,” Minister Condor stated, already showing his anticipation for the start of the 2012 Summer Games in England, where the young athletes are expected to perform even better having had more exposure to international competitions.

An assurance was given that Government resources would continue to be committed where possible to aid the development of track and field in St. Kitts and Nevis.