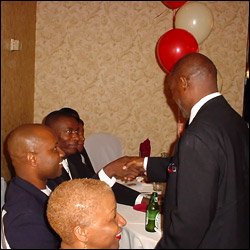 “My presence in any country around the world where there are large groups of our people has and will always be used to inform them of developments at home and importantly to hear from them what they are thinking so that their thoughts, their suggestions and ideas can form part of the body of opinion that impacts positively on policy development and formulation here in St. Kitts and Nevis,” said Prime Minister Douglas in response to questions from reporters at a recent news conference.

“There are also consular matters that nationals also bring to my attention and the attention of other ministers and their concerns give us the basis to have talks aimed at resolving those issues with officials of the host country through diplomatic channels,” said Dr. Douglas.

Dr. Douglas and other Ministers of Government have been engaging nationals in countries that they are visiting to participate in matters of state.

A series of Face to Face meetings are being planned.

Since taking office, the Denzil Douglas Labour Administration has held a series of meetings and implemented several initiatives aimed at soliciting the opinion of nationals and residents at home and abroad.

These include the “Face to Face” which allows participants ask the Prime Minister and his Ministers questions in person, via the telephone or the internet; Ask the Prime Minister, where persons phone in and as Prime Ministers questions via the telephone or the internet; the National Consultation on the Economy, which allows groups including political parties, the private sector and non governmental organisations to get first hand information on the state of the economy and make suggestions on relevant issues as well as constituency meetings, one on one consultations and meetings with interest groups.