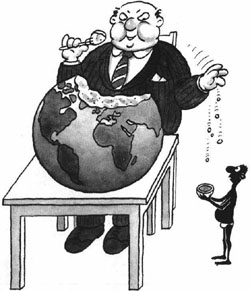 Have A Few Crumbs On Us

The St. Kitts-Nevis-Anguilla National Bank Group of Companies, is reporting an Operating Income before tax of nearly EC$50 million and Net Income of almost EC$42 million for the financial year ending June 30, 2009.

According to the Annual Report, read to shareholders at the 39th Annual General Meeting on Tuesday 30th November, the National Bank Group of Companies, achieved an EC$48.6 million profit before tax in the midst of a very challenging global economy.

According to the83-page annual report moderate economic activity in the local economy, low consumer and investor confidence in the financial system, a high and growing rate of employment in the United States coupled with a struggling housing market did little to encourage optimism in the global financial environment.

“The global financial crisis has negatively impacted the credit and security markets, placed pressure on banks’ liquidity positions and frozen foreign investments in our economy,” said the report, which also stated that the Bank has always been able to convert complex challenges into profitable opportunities and was able to achieve its operational, employee, service delivery and community objectives in spite of the many challenges.

The Report said net interest income fell by $14.8 million or 24.3% at June 30, 2009 when compared with of the previous year. A reduction in interest income and an increase in the cost of funds have resulted in lower net income for the period.

It added that although the Bank will continue to show reduced interest income and therefore reduced profits before tax for as long as those advances and remained on its books, after the tax- position of the bank will remain the same with or without the agreement.

At the end of the year 2009, net fees and commission income decreased by $8.9 million or 17.2% from the previous year’s $51.8 million. This was due mainly to a reduction in spending by cardholders worldwide as a result of global financial crisis.

Actual customer’s deposits decreased by $10.2 million or 0.09% to 1.25 billion at the end of June 2009 when compared with the deposits amount in the previous year. However, amounts owing to other financial institutions fell by $13.8 million at the end of June 2009 from the $14.5 million owed to them in the previous year, reflecting the ability of the group to service its debts in spite of tightening liquidity as a result of the global squeeze.

Going forward, the bank said it anticipates that there will be steady growth in its base as the regional and international economies improve.

At June 30, 2009, financial assets and financial liabilities maturing within 1 year totaled EC$0.9 billion and EC$1.5 billion, respectively, compared with EC$1.1billion, and EC$1.6 billion, respectively, at June 30, 2008. In spite of the negative liquidity gap in both 2009 and 2008, the group remained highly liquid and well within the guidelines set out by its Asset/Liability Management Committee.

An analysis of the deposits over the last ten years demonstrates that over 85% of those deposits can be considered core deposits and therefore, the gap in liquidity was a deliberate strategic decision undertaken by management. However, in spite of its healthy liquidity position, the group continued with its active liquidity management programme to reduce the possibility of a severe liquidity risk situation.