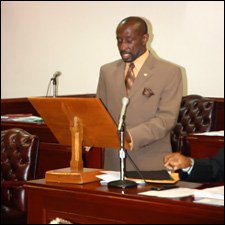 Cabinet has received a progress report from Deputy Prime Minister and Minister of National Security, the Hon. Sam Condor on his ministry’s ongoing efforts to mitigate the incidence of criminal activity in St. Kitts and Nevis.

“The Honourable Minister expressed his deep concern about the incidence of crime and elaborated on the progress made with respect to the 10-point anti-crime plan recently announced,” said Minister of Information, Sen. the Hon. Nigel Carty in the Post Cabinet Briefing.

“He advised that a copy of the Racketeering-Influenced and Criminal Organisations (RICO) Act had been received from another Caribbean state and that this document would be immediately transmitted to the Legal Department for consideration for adaptation and subsequent enactment,” said Sen. Carty, who added that “this law, when enacted, will provide greater penalties for repeat offenders and would help to apprehend gang-leaders, purchasers of stolen goods and those who aid and abet criminals.

Cabinet was very pleased to learn that high-level officials from the Israeli government were already in the Federation delivering training to local forces in intelligence gathering, documentation and processing.

“This high-level training would put our criminal investigation personnel two notches higher and would enable them to better gather and document criminal evidence, and would lead to increased conviction of criminals and reduction in criminal activity,” said Sen. Carty.

He said that the Minister recorded his disappointment with the non-completion of the CCTV installation programme and is considering the way forward with the services contractor for its immediate completion.

The minister has however projected that the CCTV cameras installation should be completed by July of this year.

Attorney General, the Hon. Patrice Nisbett, presented to the Minister of National Security a draft of the Anti-Gang legislation prepared by his department and advised of his intention to have the bill ready for introduction at the next sitting of the Parliament.

Cabinet expressed its support for the ongoing initiatives of the Ministry of National Security and commended the Minister, those in the ministry and advisory groups for their commitment to the fight against crime.