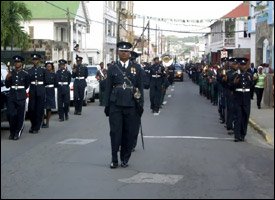 Hundreds of mourners paid their last respects to 17-year veteran of the Royal St. Christopher and Nevis Police Force, Sgt. Junior Michael Francis, who was buried with full military honours on Tuesday.

Tributes were said by the Sandy Point High School, John Mills, WPC Smithen and PC Brandy, prior to the start of the Service.

The Eulogy was delivered by barrister at law and brother of the deceased, Mr. Ricaldo Caines.

Following the Service, hundreds of shoppers and curious on lookers lined the street to view the casket draped in the National Flag as the military procession led by the Mourning Party as well as the St. Kitts-Nevis Defence Force Band, the Police Band, platoons of the police, defence force and coast guard made their way to the Springfield Cemetery, the final resting place.