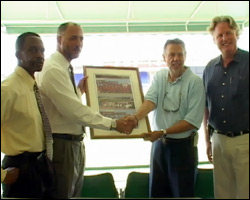 St. Kitts and Nevis’ hosting of the 4th and 5th One Day International games between the Australian cricket team and the Windies was a success based in large part to the knowledge and experience gained from the 2007 ICC Cricket World Cup (CWC).

This was highlighted by officials attending a brief presentation organized to mark the contributions of the Chairman of Cricket World Cup St. Kitts and Nevis Ltd. Charles Wilkin QC. Minister of State for Sports Honourable Richard Skerritt noted that Mr. Wilkin’s service was symbolic.

“Charles worked as a volunteer [for CWC]. “There are many of us who were paid to do what we did,” said Minister Skerritt. “Charles represents the hundreds of volunteers locally and the thousands of volunteers across the Caribbean who gave their time to West Indies cricket, to national and regional development, and to sports tourism everywhere. As we wind up Cricket World Cup St. Kitts and Nevis Ltd., one year later, I want to say that your work is much appreciated by the Government of St. Kitts and Nevis.”

While presenting a wall-size framed picture of the first ever ODI held in St. Kitts in 2006 between India and the West Indies cricket team, Minister Skerritt explained that the tribute was fitting as Mr. Wilkin played an important role in establishing an international cricket venue in St. Kitts and Nevis.

Also present at the ceremony was Donald Lockerbie, who served as the Venue Development Director for the CWC. He noted that the Federation has an excellent international reputation in staging world-class events as evidenced by the many positive reviews received from visiting sporting fans and officials.

Lockerbie pointed to the fact that the regional CWC organizers had five major meetings in St. Kitts and Nevis. “Really when we look back at it, St. Kitts had truly one of the leading local organizing committees and was one of the leading countries even [though] it was our smallest and I think that is a lesson for everybody,” he stressed. “The energy and the efforts that were put in by this Government, by the LOC and by your leadership is the legacy that I believe will be showing itself for many years to come.”

Mr. Wilkin has since retired from the administration of cricket and explained that he was grateful for the opportunity to serve his nation. “I really appreciate this presentation. It means a lot,” he stated, noting that the picture will be prominently featured in his home or office. Wilkin added that he was pleased with the high level of local organization for the Digicel Home Series Games and his heart remains with the sport and the development of local facilities.