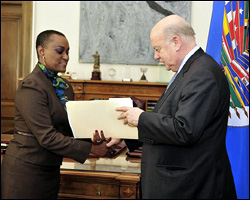 Moments after St. Kitts and Nevis Prime Minister Hon. Dr. Denzil L. Douglas announced her appointment at his press conference on Tuesday, the Federation’s new Permanent Representative to the Organization of American States (OAS), Her Excellency Ambassador Jacinth Lorna Henry-Martin, today presented her credentials to the Secretary General of the hemispheric organization, JosÃ© Miguel Insulza, during a ceremony in Washington, DC.

Secretary General His Excellency Insulza noted the warm welcome offered to the new representative of the Caribbean country, asserting to Ambassador Henry-Martin that “the unusual presence of so many ambassadors and representatives certainly is a demonstration of the appreciation we have for your country.” Furthermore, he said the OAS and Saint Kitts and Nevis have for the past few years had a “very important relationship” and that the new ambassador’s “vast experience in international organizations and international relations will be of great benefit to this institution.”

The head of the OAS also said he felt “very happy to have full representation in the Caribbean again.” “I’m sure that these years in which we have so many challenges in the region, the support of all your countries and the support of your country will be essential to face these challenges with success.”

For her part, Ambassador Henry-Martin thanked those present for their “warm welcome” and said it was a great honor for her to represent her country before the hemispheric organization. She asserted that her government wishes “to work for the strengthening of bilateral and multilateral ties, and also through our participation in the dialogue to ensure the OAS remains true to the principles espoused in its founding chapters.”

Finally, the new representative of Saint Kitts and Nevis said she pledged “to work with you to ensure that the hemispheric objectives are realized,” and that she would “do so proudly on behalf of my country, the region, and this hemisphere.”

Ambassador Henry-Martin also represents her country as Ambassador to the White House, and she has a long and distinguished career in public service in her country. She has been Director of Culture and Parliamentary Secretary for Culture at the Ministry of Tourism, Culture and the Environment; Federal Minister of Government, an elected position with portfolio responsibilities in Information, Culture, Youth and Sport; Deputy High Commissioner in the United Kingdom; and, most recently, Director of US Operations for the St. Kitts Tourism Authority, a position she left in December 2010