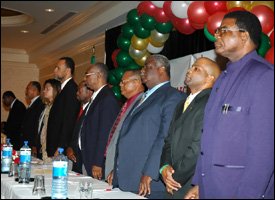 The new Voters List posted by the Electoral Office has over 28,500 registered voters.

This is according to information obtained from the Electoral Office.

Following the electoral reform exercise in St. Kitts and Nevis, which saw the confirmation of registered voters between December 2007 and October 2008 and the registration of new eligible voters, some 28,542 persons are registered on the Voters List at the end of December 2008.

In June 2006, the St. Kitts and Nevis National Assembly approved the road map to electoral reform and the process was officially launched in August of that year.