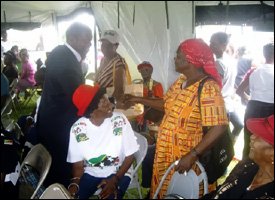 The St. Kitts – Nevis Administration has kept its promise to increase social security pensions with effect from January 1st 2009.

The Social Security Board in a statement Tuesday said the increase approved by the Government of St. Kitts and Nevis is as a response to the effects of inflation on the existing Social Security pensions being received by persons in the twin-island federation.

“All minimum payments have been significantly upgraded by a 33 percent increase. Additionally, all persons already receiving payments which are more than the minimum will experience increases in varying amounts ranging from 3 percent to 15 percent. Assistance Pension is also being increased by 19 percent,” the Board said in a statement.

The Minimum Contributory Age and Invalidity pensions are being increased by 33 percent from $300.00 to $400.00 per month.