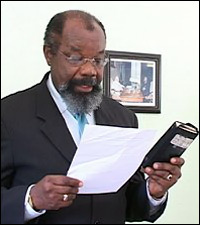 Attorney at Law and Crown Counsel in the Attorney General’s Chambers, Mr. Arudranauth Gossai, Justice Thomas after a new hearing, issued a new order preventing Clear Harbor (Nevis) Ltd, Clear Harbor LLC, Drive Partners (Nevis Limited) and two other persons from disposing, transferring, charging, dissipating, or diminishing or in any way howsoever dealing with any assets held in the names of the companies and persons named in the Injunction.

The Injunction, which has been varied, was sought following the filing of an Affidavit by Labour Commissioner Mr. Spencer Amory claiming that Clear Harbor Nevis Limited closed its operations terminating the employment of all its employees and owed payments for several benefits, including wages, holiday pay and payment in lieu of notice.

The company also owes monies to the Social Security Board for Social Security and Employment benefits, Severance Payments and Housing Levy, electricity, water and taxes to the Inland Revenue Department.