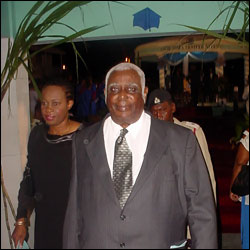 The Federation’s Governor General, His Excellency Dr. Sir Cuthbert Montraville Sebastian, GCMG, OBE, MD. CM, is among hundreds of invited guests down to attend the Royal Wedding of Prince William and Kate Middleton on Friday.

Also down to attend the ceremony are the Governors-General of St. Vincent and the Grenadines, St. Lucia, Antigua and Barbuda, Jamaica, the Bahamas, Barbados and Belize; the Prime Ministers of the Bahamas, Barbados, St. Lucia, St. Vincent and the Grenadines; the Premiers of the British Virgin Islands, Bermuda and the Cayman Islands, and the Chief Minister of Montserrat.

The wedding ceremony is expected to take place on Friday at Westminster Abbey and 1,900 guests are to attend. Some 650 of those guests have also been invited to the lunchtime reception at Buckingham Palace, hosted by the Queen; and 300 will attend a dinner at the palace, given by Prince Charles.

Authorities speculate that some two billion viewers across the globe will tune in to see Prince William and Middleton exchange vows.

When Prince Charles and Lady Diana Spencer marry in 1981 it is said 750 million watched that ceremony.