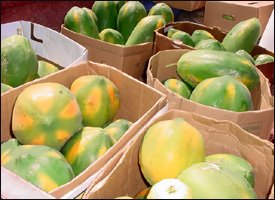 Distribution of more land and an increase in fiscal incentives have contributed to a one hundred percent growth in agricultural output in the last 8 years.

Minister of Agriculture, Hon. Cedric Liburd informed the Federal Cabinet on Monday that between 2000 and 2008, agricultural output has grown by about 100 percent to 2.4 million pounds.

“This is to say that fresh local produce is twice as abundant as it was only 8 years ago,” said a Post Cabinet Briefing.

The dramatic increase is as a result of the distribution of more land to local farmers, greater extension services support by the Ministry of Agriculture, fiscal incentives for farmers, and growth in demand by both the local and visitor populations.