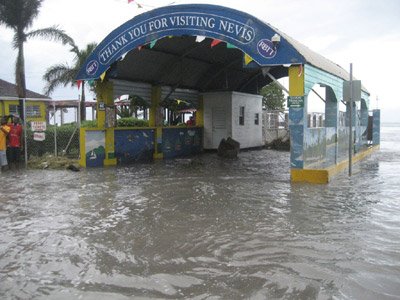 St. Kitts and  Nevis’ Prime Minister Hon. Dr. Denzil L. Douglas said Saturday that the utmost priority of his governing St. Kitts-Nevis Labour Party Administration is the protection and preservation of the stability, the viability, and the long-term prospects of the nation and its people.

“We have created an economy that, at the end of the day, has been able to withstand the rigors and the ravages of a global economic crisis that has wreaked untold tumult and trauma in many of the most powerful nations on earth.  And we say this, not in a spirit of arrogance, but with the deepest humility and heart-felt gratitude that our efforts, on behalf of all of the people, have borne fruit,” said Prime Minister Douglas in his Independence Message to mark the 26th Anniversary of Nationhood.

Dr. Douglas said he was pleased that, notwithstanding the manifold challenges that abound across the region and the globe, the National Debt as a percentage of GDP is falling, and the primary surpluses have reached record levels.

“My Government has stated over and over that our Debt was incurred to rehabilitate our hurricane-battered economy of 1990’s and early 2000’s and to pursue projects that would yield future economic benefits. The trajectory of our debt in recent years clearly demonstrates that we are now reaping those benefits,” said Prime Minister Douglas.

He said his Government is pleased that the stimulus package is effectively countering the dampening effect of the global recession and that the package of assistance to Hotels and Restaurants has kept many of them open, to the benefit of the workers at these enterprises.

“Our YES programme has also contributed immeasurably to economic growth by directly training and gainful employment to over 1000 young people. Even more importantly, the YES programme provides these young people with knowledge, skills and experience that would significantly enhance their earning capacity for many years to come,” Dr. Douglas told the nation.

He said his Government sees the critical thinking, exercising unfettered imagination, information technology, university training and the competitive edge in all matters professional as the keys to liberation and independence  in the 21st Century.

Dr. Douglas said that the St. Kitts-Nevis Government has created a new economy, and provided sound management of it.

“We have given every opportunity, for all our people, at all ages, to learn, to develop, to grow, and to become self-actualizing beings,” said the Prime Minister in his 2009 Independence Message.