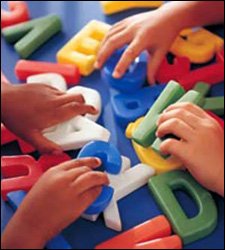 A group of 15 early childhood professionals headed by Director of Early Childhood in St. Eustatius, Rita Hasselle spent Thursday May 6 as guests of the Early Childhood Development Unit in St. Kitts.

The visitors were then accommodated at the Early Childhood Unit where they met and held discussions with Mrs.Walters and her staff on a number of related issues.

The head of the overseas team, Rita Hasselle stated that the primary purpose of the visit was to observe the early childhood programme in general, but more specifically the High Scope Curriculum used at the centres.

Director Hasselle informed that the Curriculum was recently introduced in St. Eustatius and having learnt of the success of the programme here in the Federation, they were advised by colleagues in the region to visit and observe its operation.

Chief Education Officer Dr. Patrick Welcome addressed the group after receiving individual feedback from their experiences at the centres. One visitor was noted as saying that she “got goose bumps as she observed the smooth flow of activities at the centre.”

The visitors said they were also very impressed with the level of professionalism displayed by the teachers, but even more so, by the way the children easily transitioned from one activity to the next. “It was so quiet, we could not believe that children were in there,” another St Eustatius teacher said, “I think it was an offshoot of the calmness of the teachers themselves. They were calm and in control”.

Dr. Welcome highly commended the work done by the local Early Childhood Unit and said he was pleased that they continued to be of assistance to their counterparts in the region.

He reminded the gathering of the critical nature of their jobs in molding young, impressionable minds and encouraged them to not get weary as they provide guidance, care and education to the next generation.

The group is expected to return to in St. Kitts in June to participate in this years’ child month parade, and a special request was made for local early childhood staff to provide additional training in St. Eustatius.

Mrs. Walters confirmed that her staff was anticipating meeting the request and would eagerly jump at the opportunity to assist in providing consistent, accessible, affordable and high quality early childhood education to all children  and families.