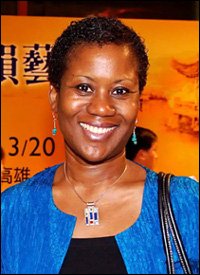 St. Kitts and Nevis‘ top diplomat  in the Republic of China on Taiwan, Her Excellency Ms. Jasmine Huggins,  was among members of the Taipei International Women’s Club participating in  a charity programme to raise funds to help those in need, give them a better life and build a better society.

“Dressed up like a cute Caribbean doll was Charge d’Affaires Jasmine Huggins of St. Kitts and Nevis. She even did a jig in her native style to the delight of the crowd of onlookers,” wrote Journalist Nancy T. Lu in the Taiwan News, adding: ” Not to be upstaged was Swaziland Ambassador Njabuliso B. Gwebu in her exotic stylized African dress.”

According to the report, the TIWC’s active women of different nationalities led by Ruby Sung, the outgoing president, organised this year’s traditional spring gala dinner last Friday at the Grand Formosa Regent of Taipei. This was their way of winding up another meaningful year by helping the financially strapped groups.

For entertainment highlight, Connie Pong, the new TIWC president, personally approached the gracious ladies of the diplomatic corps including even an African ambassador, convincing them to participate in a parade of national costumes during the charity gala dinner.

Halfway through a sumptuous feast, which included dishes like braised shark’s fin soup with bamboo fungus, whole abalone sauteed with mushroom and Chinese cabbage, as well as double boiled chicken soup with ginseng and medlar, program hosts Carlson Huang and Jane Lai announced that the ladies were ready to show their flair on the catwalk.

The eyes of the spectators popped when the beautifully dressed women emerged one by one. Beata Pfeiffer, whose husband works at the Austrian Tourism Office in Taipei, wore an Austrian dirndl and it fitted her snugly. Mayumi Hu, showing her Brazilian roots, chose a sporty outfit in the colors of yellow and green, all playful national reminders of the land that produced star soccer players like Pele, Ronaldo, Ronaldinho and Kaka.

The Indian sari looked lovely on Divya Narang, who managed to dance the night away like a swinging disco queen without changing into something less formal. For her part, Lily Assana put on a dazzling and rather formal Indonesian costume complete with jewelry. Everything was ordered back home for her to wear at the Taipei event.

Onuma Takaku in an elegant Japanese kimono was the picture of a demure lady from the Land of the Rising Sun as she walked with measured steps across the stage during the fashion show. Meanwhile Zawiah Ahmad in her veiled Malaysian costume lent her natural and fun-loving presence to the program.

The barefoot Ann Keke from Nauru, wearing flowers on her head and around her neck, appeared ready to sashay to hula dance music. Gloria Stella de Diaz from Paraguay had the opportunity to show how beautiful her folkloric dress was. The tiered skirt required yards and yards of fabric.

As for Connie Pong, she wore a simple but nonetheless attractive red Malaysian dress.

Ruby Sung led her board members and other participants from Taiwan in modeling different styles of the “qi pao” or cheongsam. Kelly Cheng, Amy Chang, Sophia Lu, Julie Wang, Annie Yung, and Faung Jin Lee, all in figure-hugging Chinese dresses, basked briefly in the limelight.

Earlier on Friday night, Sung on behalf of the TIWC donated NT$100,000 to 410 elementary school children in Taitung through the Wesley Methodist Church. She also handed to Margaret Lee a check of NT$100,000 and this was to go to the TIWC Education Foundation. The Taiwan Foundation for Rare Disorder was also a recipient of a donation of NT$100,000.