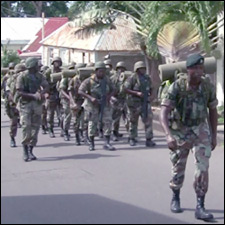 A platoon of soldiers from Alpha Company of the St. Kitts and Nevis Defence Force marched through the streets of Basseterre on Friday, as a show of strength for the past, present and future of the twin-island Federation.

The men and women were led on the three-hour route march by their Company Commander Captain Kayode Sutton, who told SKNIS that such events are held regularly at various locations around St. Kitts. However, Captain Sutton emphasized that today’s occasion had a significant meaning.

“Today marks the 44th anniversary of the invasion of St. Kitts which occurred on the 10th of June 1967,” he said, recalling a dark chapter of the past when armed persons attempted to overthrow the elected Government, headed by Premier Honourable Robert Bradshaw. “We have to learn about our history to see where we are and “¦ [move forward] into the future.”

Captain Sutton stressed that the march also served to boost the morale of the soldiers and demonstrated a show of force to persons wishing to engage in antisocial activities.

A route march typically begins at 5:15 a.m. Today’s session started at 8:00 a.m. when most persons were either at work or heading there. The march took the soldiers to some areas classified by the security forces as “hot spots.” Captain Sutton noted the response of the public.

“People say that they loved to see us,” he stressed. “It was a source of inspiration for our men and reassuring for the public that we take their safety and security as paramount. The St. Kitts and Nevis Defence Force will continue to support the Royal St. Christopher and Nevis Police Force in the maintenance of law and order.”