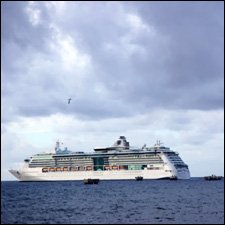 Serenade of The Seas In St. Kitts
Photo By Erasmus Williams

St. Kitts welcomes its first ship for the official 2011/2012 Cruise Ship Season next Tuesday October 8th with the arrival of the Serenade of the Seas.

The 90,000 ton cruise liner of the Radiance Class cruise ship is owned and operated by Royal Caribbean International.

The Serenade of the Seas, which has a passenger capacity of 2,450 and a crew of 891, will berth at Port Zane. It will make two calls in October and a total of 16 calls for the season with an estimated 40,640 passengers.

The 3.050-passenger capacity Carnival Victory arrives on Friday 7th October with three more scheduled calls in October and a total of 51 calls between October 2011 and September 2012 bringing an estimated 155,550 passengers.