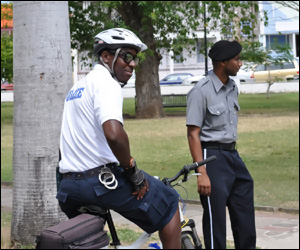 Crime in the Federation of St. Kitts and Nevis decreased 62.4 percent in March 2014 when compared to the same period last year, according to figures obtained from the Royal St. Christopher and Nevis Police Force.

The drop is reflective of a number of enforcement and engagement type strategies implemented over the past years such as increased proactive patrols, advanced training for officers and greater collaboration with private partners. Additionally, closer ties have been forged with residents as well as local, regional and international security agencies.

“This is great,” said Ameera Robinson, the mother of two young children, after hearing about the statistics. “The police have been doing a great job and I give them thumbs up.”

Another resident, Denis Armantrading, shared similar sentiments. “They seem to be doing a pretty good job honestly,” he stressed. “”¦ You’ll never be able to please everrybody,” he said referring to detractors, “”¦ [but] just look at the results and thatÃ¢’s all you have to base it on.”

The figures for March 2014 are consistent with decreases in other months. Reported crime was down 36.9 percent in February and 41.4 percent in January. The downward trend extends back into 2013. Continuing this success will require additional investment ““ as pledged by government and an adaptive strategy to respond to unfolding developments. However, almost everyone agrees that one of the most important ingredients is the cooperation of the public.

“All we have to remember is country above self,” explained Armantrading, quoting the Federation’s motto. “Whatever you do should be for the benefit of the country. If you know you’re not supposed to be doing something [illegal] and you’re caught doing it then you just have to remember you’ll have to bear the consequences.”

Ms. Robinson encouraged persons to continue providing support to the police by reporting crime or suspicious activity. “Once they are going to keep it unknown to the public who is giving the information,” she concluded.

Crime Stoppers International has been a valuable tool in this regard allowing residents of St. Kitts and Nevis to call 1-800-8477 to anonymously provide tips to the local security forces.