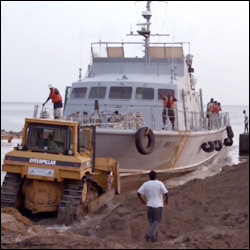 Coast Guard vessel Stalwart is back on the high seas after being refloated, Friday evening.

The 116 foot Stalwart and its smaller sister Ardent, were deliberately beached on Monday, August 30, to protect the vessels from the turbulent waves generated during the passage of Hurricane Earl.

Ardent was returned to the Coast Guard Base on Tuesday via flat-bed truck. The size of Stalwart meant a larger operation was necessary. As such, local companies St. Kitts Marine Works, and Rock and Dirt collaborated in the venture along with the St. Christopher Air and Sea Ports Authority and the St. Kitts-Nevis Defence Force.

Regiwell Francis of St. Kitts Marine Works explained that excavators worked very close to the boat removing the sand from the sides, while a shell clamp positioned on a barge removed the sand from the sea floor. When the holes were deep enough, the Port Authority tug boat pulled the stern of the Coast Guard cutter while a bulldozer pushed the front which was protected by a large tire. An excavator helped to guide the right side of the vessel and soon after she was freed.

Marine Works services was offered at minimal cost while Rock and Dirt provided its experience and equipment for free. The company’s General Manager Alexis Hazel told SKNIS that the gesture was his way of giving back to the community and also sends a strong message.

“We are capable of taking on any job that comes to our island. So we are demonstrating to the Government and any investor that Rock and Dirt is capable of doing your jobs and delivering projects on time,” he said, adding that the same held true for St. Kitts Marine Works.

Spontaneous applause and cheers rang out from military personnel and spectators when the vessel reentered the water. Defence Force Captain Kayode Sutton thanked all involved for their contribution.

“I feel great. I feel happy. I think it is a wonderful day for the St. Kitts-Nevis Defence Force as a whole and for the Federation,” the enthused military officer stated. He thanked the four main partners as well as John Tweede of Tweede Enterprises and the “patriotic citizens” who assisted the beaching effort on August 30.

The Stalwart is now back at the Coast Guard Base where it will undergo a complete damage assessment.