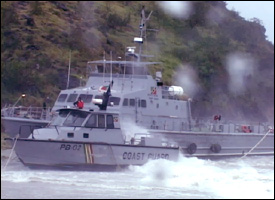 The decision to beach the Coast Guard Vessels Stalwart and Ardent was deemed necessary to save lives during the passage of Hurricane Earl.

On Tuesday’s edition of SKNIS Perspectives, Captain Kayode Sutton of the St. Kitts-Nevis Defence Force (SKNDF) recounted events that led to the decision to protect the crew and reduce the risk of further damage to the boats.

“The vessels departed the Coast Guard Base a day before the storm,” he explained, noting that the bigger of the two boats, Stalwart, was towing Ardent to safety through the rough waters. The vessels were heading to Long Point in Nevis. However, as they approached the channel between the two islands, Stalwart began to encounter mechanical difficulties.

Captain Sutton said “the mechanical problems could not be resolved at sea all though the engineers continuously worked on it. “¦ To ensure the safety of the vessels and the crew onboard it was thought necessary to find a safe location to beach the boats.”

National Disaster Coordinator Carl Herbert also appeared on the programme and noted that the National Emergency Management Agency (NEMA) cautioned all boat owners to seek safe harbour for their vessels as the forecast called for high seas and turbulent waves generated by the Category 1 hurricane. These warnings, coupled with the advisories issued by follower mariners and marine authorities made it unlikely that boats would be at sea during the storm, he added.

Captain Sutton stressed that if the boats were left at sea, a national disaster may have occurred.

“It could have been so serious. We could have lost the boats and we could have lost all lives onboard,” he revealed, while commending the crew who performed creditably throughout as well as the civilian seamen who came to assist the force personnel being supervised by the Commander of the Defence Force Lt. Col. Patrick Wallace.

“That was the safest decision that could have been made at the time. The vessels were beached, were resting perfectly on the sand and most importantly all of the men and women were safe.”

SKNIS contacted Captain Sutton on Wednesday for an update and was told that last evening, Ardent was placed in its cradle and transported via flatbed back to the Coast Guard Base. It has since undergone inspection and findings reveal that there was relatively no damage to the boat resulting from the beaching.

The SKNDF Officer mentioned that efforts will be made to refloat the Stalwart once the weather allows. In the meantime, the Coast Guard continues to patrol and survey the coastline of St. Kitts and Nevis by the use of other vessels.