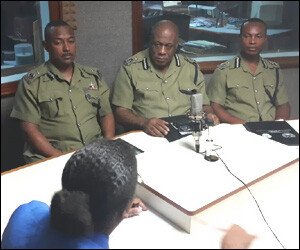 Radio Interview About Crime With Police

“The Royal St. Christopher and Nevis Police Force is committed to fulfilling its mandate of reducing crime and the fear of crime in our federation. The force is a focused team, and we will achieve our mission,” said the acting Commissioner. “The police can’t do it by ourselves. We all know that our islands are small, and they are to small for something to happen and for someone not to know.  If you see something, if you hear something as it relates to a violent crime, or any criminal activity, tell someone and you can start with crime stoppers,” he encouraged.

The acting Commissioner underscored that the involvement of the community is critical to the police achieving its goals of reducing crime, and expressed confidence in the ongoing community policing efforts.

He also mentioned greater collaboration between the justice system, and said that this is important.

“We are concerned about the persons who commit crimes and the delays we have before trial and we are also concerned about the rehabilitation process, so as to reduce recidivism,” he stressed, noting that government has committed to strengthening the prosecutorial system.

Government has also pledged to review existing laws and enhance their scope in order to provide appropriate redress to criminal acts.