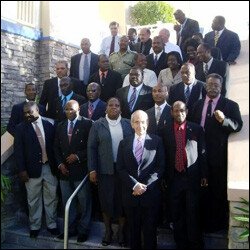 The high command of the Royal St. Christopher and Nevis Police Force has been told that the citizens and residents of the twin-island Federation are clamouring to see them demonstrate their expertise from the aggregate years of training.

“Not only in the areas that captured your attention and participation over the past days, but also from what you acquired at institutions of higher learning, as you moved through the various ranks of leadership in the Force. The substantial investment in your training demands greater dividends,” said Prime Minister and Minister of National Security, Hon. Dr. Denzil L. Douglas at the closing ceremony of a Senior Executive Management Seminar conducted by Prime Minister Douglas challenged told the 19 commissioners, superintendents and inspectors of the Royal St. Christopher and Nevis Police Force to confront the increase in gun related crimes in the twin-island Federation as an attack on their own capability to effectively sustain peace in the various communities.

“Retooling, training and re-strategising will always set you one step higher,” said Dr. Douglas as he urged them to draw on their own experience and the newly acquired methodologies to successfully implement their Plans of Action.

“Your close collaboration with the other agents of the Security Forces is critical to rebuilding the confidence of our people, a confidence that has been shattered over the last few years, a confidence of our people in your own ability and capability to protect them and safeguard our land. You must continue to unite, especially with your own colleagues in the Defence Force and also those in the Customs Department and members of civil society and take the relevant action to stamp out this scourge of gangsterism that is foreign to our peaceful culture,” said the Prime Minister during the ceremony attended by Canada’s High Commissioner to St. Kitts and Nevis, His Excellency David Marshall. The course was financed by the Government of Canada through the Canadian-Caribbean Cooperation Fund (CCCF) and facilitators were retired experts from the Royal Canadian Mounted Police (RCMP).

“Yes, we are concerned and disgusted with the senseless killing and irresponsible violent encounters among warring gang members. This form of deviant behavior has no place in the transformation process of a progressive country such as ours. As members of the security forces, apart from the management training course that you are receiving at this time and from time to time, you will be receiving, you will also be trained to curb the senseless lack of respect for human lives and to quell the open warfare that is being waged among rivaling gang members through the necessary support from the former FBI officer that we have recruited in recent times,” added Dr. Douglas, who called for visibility on the streets, in the alley ways, in the villages and the towns and around the school compounds “because that is what our citizens demand of you.”

In reiterating another call for vigilance, Prime Minister Douglas told the top brass of the police force that there are those who would continue to test their own leadership skills and their ability to think and act strategically.

“You have to be focused I warn and also emphasise that you have been charged to lead this nation’s fight against crime. I therefore challenge you, the High Command to pool your collective years of policing and move forward, re-energised and recommitted to help make a difference in all of our communities here in St. Kitts and Nevis. You have to lead the way in rebuilding the confidence of our citizens and residents in your capacity to reverse the trends in youth crime,” said Dr. Douglas, who added that as the Minister of National Security, he will “continue to ensure that you are equipped with the tools for the trade.  However with all the investment in security, especially this budget year, you must continue to deliver. The future of policing depends on strong performance and achievement on all fronts.”

The St. Kitts and Nevis leader used the opportunity to express profound gratitude to the Government of Canada and to the Organisation of American States (OAS) for their commitment and involvement in the strengthening of the security mechanism of the region as a whole and also the Embassy of the Republic of China and all other stakeholders who have all come on board in supporting the security forces in St. Kitts and Nevis.

“Go forth with a strong resolve to effect positive transformation as you endeavour to live up to the high ideals and mandate of your noble profession and that is to provide safe and secure communities for the people of your proud Federation of St. Kitts and Nevis,” said Prime Minister Douglas.