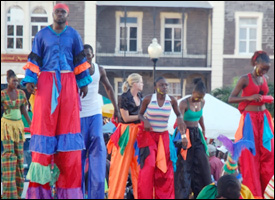 St. Kitts – Nevis is one of several Caribbean islands mentioned for hosting one of the most cultural and spectacular celebrations during the Carnival season.

St. Kitts is featured in the Sunday edition of the Miami Herald, under the subhead “St. Kitts: Get Happy,” which highlight’s St. Kitts’ Mocko-Jumbies, dancers bejeweled costumes and their unforgettable calypso performances.

The Miami Herald is one of the largest daily newspapers in the Miami area with a circulation of 210,884.

Reffes, tells his readers that St. Kitts kicks up her heels from December 17th 2010 through January 2nd 2011, with Mocko-Jumbies on eight-foot stilts, dancers in bejeweled costumes, body-gyrating calypso and performances of the comedic play, The Bull. The Festival Village, in the capital city of Basseterre, is the place to be on December 26, while the New Year’s Day Parade and the Last Lap Jam on January 2nd are big-ticket Kittitian traditions.

“Visitors are enthusiastically welcome and can even participate in the Grand Parade,” says Sen. Ricky Skerritt, Minister of tourism, “I am especially fond of the street parades and have been an active participant since I was a teenager.”

From steel pan and jump-ups to pageants and parades, Carnival celebrations in the Caribbean are the greatest parties under the tropical sun. The tradition started centuries ago when Italian Catholics hosted costumed balls before the first day of Lent. As meat eating was not allowed during the holiday, they called the festival carnevale which means “put away the meat.”

The tradition made its way to the Americas where wealthy plantation owners hosted grand Carnivals in their homes while their slaves held smaller ones in the backyard. After slavery was abolished, Carnival took to the streets, honoring the African tradition of parading through villages sporting costumes and masks fashioned from feathers and fabric and decorated with bone, bead and shell. Aimed not only at bringing good fortune to the revelers, these flashy fetes also appeased angry relatives who had passed into the next world. Today, nearly every country in the Caribbean hosts a cultural kaleidoscope of high-octane dance, raucous street jams and fantastical pageantry.

“Be warned that Caribbean music is highly infectious and can lead your body … to move muscles one wouldn’t normally use in daily life,” said Hugh Riley, secretary-general of the Caribbean Tourism Organization, “Expect to be lured into a music-infused costumed-covered trance that is addictive and hard to resist.”