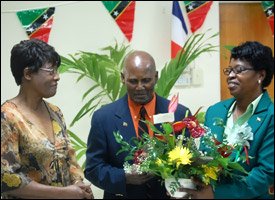 Kittitian boxer-turned pastor, Cecil Nurse Maynard-Hodge was honoured recently at the installation of the Board of the St. Kitts and Nevis Foundation of Sint Maarten.

St. Kitts and Nevis Prime Minister Hon. Dr. Denzil L. Douglas, who performed duties of installing the Board, was given the honour to present the award in appreciation of Pastor Maynard-Hodge for his contribution to the Federation of St. Kitts and Nevis and Sint Maarten.

Born in Basseterre, St. Kitts on April 7th 1936 to Mercedes Hodge of Sint Maarten and Erik Maynard, young Maynard attended the Basseterre Boy’s School, but left school in Grade 5. His first job was working for the Dutch airline, KLM.

Being young and very energetic and in his own words “very obstinate,” he became very interested in sports. He loved boxing, track and field and bodybuilding. He became one of the fastest runners for the island in his time and earned the nickname “˜Mahojack.’. He paved the way for persons like Kim Collins.

Mr. Maynard had the opportunity to travel to different places representing St. Kitts in various sports.

He left St. Kitts in 1959 to join the West Indies Federal Army to Jamaica to keep peace there. He spent three years there, and worked with the boys like Kitty Gardener and Kenrick Johnson.

In 1967, he left St. Kitts for St. Thomas, where he found employment, and worked at the Bata Shoe Store. Because of his intelligence and his interest in the job, he was promoted to Manager. He worked there for several years, and in 1976, his brother the late Commisioner Rupert Maynard, encouraged him to come to St. Maarten. It was not what he expected, but he worked with his brother and then got employment with the Windward Island Bank.

He has just recently retired after twenty years of service. He enjoyed his work at the bank as a collector, and as he stated “˜there I met many people and made many friends.’

When asked why he decided to become a preacher, he replied: “˜I didn’t decide that, but God chose me. His motivation was his aunt Mildred Scott, who was a local preacher. She made sure that he attended Church and Sunday School every Sunday.

Pastor Hodge did not have a physical congregation as such now, but his long running television programme “˜The Voice of Deliverance’ is also aired on the local radio stations PJD2 and Pearl FM.  and has earned him a vast audience, some of whom he may never meet. Only eternity will reveal, what has been accomplished through this Ministry.

He is very down to earth, outspoken, and because of this, he may not be liked by all, but as he always say “˜I only speak the Plain Truth “˜. One of his Greatest sermons is the one entitled “˜Attitude is more important than facts.’  He said that the youth today donot have any respect at all. He said that life will be very difficult for them if they do change their attitude.

He became very emotional, when he speaks of his inspiration or mentor the late Sir Robert L. Bradshaw. He mentioned that inspite of the fact that he never had a chance to attend High School; he became a very Intelligent man and a great Leader.

He has children from a previous marriage and has several grandchildren and great grand children.

When asked if he would give a word to the Nationals of St. Kitts and Nevis in Sint Maarten he responded: “Stay together and worked as one. To those who are not doing anything positive, go back home and find something to do and stop giving the Federation a bad name.”