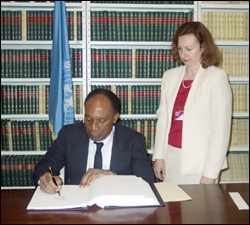 St. Kitts and Nevis bids farewell to one of its illustrious sons, the late His Excellency Dr. Joseph R. Christmas, former Ambassador of St. Kitts and Nevis to the United Nations and Global Chief (Water Supply and Environmental Sanitation) at the UNICEF, UN Headquarters in New York.

Viewing of the body from 1:00 pm to 2:00 pm will be followed by the Service which will be officiated by Rev. Jeremy B. Francis.

The eulogy will be delivered by Mr. Anthill Rawlins.

Dr. Christmas served as Manager/ Water Engineer, Water Department, St. Kitts and Nevis, 1972-1977 managing the national water department with a staff of over 100, from the planning through to the delivery stages, plus the financial aspects.

From 1978 to 1983, he served as Senior Project Officer (Water and Environmental Sanitation) UNICEF, United Nations, based in Mozambique, Africa, employed by United Nations Children Fund (UNICEF) and responsible for the Organization’s input in terms of water supply and environmental sanitation to Mozambique whose official language is Portuguese.

In executing those functions, he advised the government and trained technical personnel, among other duties.

He served as Senior Programme Officer (Water and Environmental Sanitation), UNICEF, United Nations Headquarters in New York and functioned as a part of a team with global responsibilities for sector in question from 1984 to January 1989.

As Global Chief, he handled all matters pertaining to policy and strategies for the sector and the inter-sectoral linkages to the other main sectors, namely, Health, Nutrition, Education, and Women in Development.

He served as UNICEF (Resident) Representative from January 1993 to December 1995 and carried out specific assignments in Angola and Kenya, where his main responsibilities were related to the management of the local diplomatic and development activities, on behalf of the organization.

Dr. Christmas took early retirement from UNICEF and the United Nations on January 1 1996.

He served as St. Kitts and Nevis’ Permanent Representative to the United Nations from August 1, 2000 to November 20, 2006.