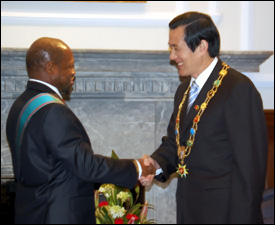 St. Kitts and Nevis on Thursday bestowed its highest civilian honour on the President of the Republic of China (Taiwan) His Excellency Ma Ying-jeou.

“The Order of St. Christopher and Nevis” was bestowed by St. Kitts and Nevis Prime Minister Hon. Dr. Denzil L. Douglas during a ceremony at the Presidential Palace in the Taiwan capital.

The Federation of St. Christopher (St. Kitts) and Nevis and the Republic of China (Taiwan) both share rich traditions and culture as well as the universal values of democracy, freedom and human rights.

“Our relations are amicable and cordial. Cooperation between the peoples and governments of our respective countries is steady and constant,” it added.