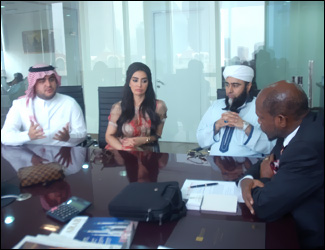 St. Kitts and Nevis’ Prime Minister the Rt. Hon. Dr. Denzil L. Douglas continued efforts here on Wednesday in putting into operation the National Adaptation Strategy when he met with several businessmen and women, who have expressed an interest in investing in St. Kitts and Nevis.

The St. Kitts and Nevis leader who is on a visit to Dubai met with business persons from the United Arab Emirates, Egypt, China, Saudi Arabia, Russia, Afghanistan and Iraq involved in manufacturing, hotel construction, tourism, agriculture, financing and tourism.

Prime Minister Douglas in inviting them to do business in St. Kitts and Nevis urged the officials of the need to partner with local businessmen and women and give the people of the twin-island federation an opportunity to to develop and improve their quality of life.

During a press conference Tuesday and at the formal launching of the Hyatt Park St. Kitts that evening attended by over 400 persons including nationals, Dubai Government officials and diplomats from several nearby states, Prime Minister Douglas said Dubai has been featuring quite prominently in the plans and deliberations of the Government of St. Kitts and Nevis in recent years, as it has become increasingly clear that significant opportunities exist for constructive collaboration between this part of the world and St. Kitts and Nevis for the betterment of both regions and peoples.

Pointing to the social, political, and economic stability, Prime Minister Douglas said St. Kitts and Nevis is a stable, middle income country with a long tradition of parliamentary democracy, having attained independence from the United Kingdom in September 1983 and it was in 1984 that the internationally-known as the St. Kitts and Nevis Citizenship by Investment programme was introduced.

“Our skilled management of the economy, in this period of global volatility and turbulence, has been duly and widely noted, leading to an even further strengthening of our already-positive relations with the international financial community.  The International Monetary Fund, for example, has repeatedly expressed its support for the stabilization and other measures that our Ministry of Finance and our domestic team of financial experts have successfully implemented ““ even in this era of global economic uncertainty,” said Prime Minister Douglas.

He noted that although the smallest nation in the western hemisphere with a geographical area of 100 square miles and a population of 50,000 “we have long known to be our reality ““ and which discerning travelers and investors have now come to know as well.”

“First, there is the matter of our natural endowments.  And although I understand the importance of humility, it is also true that the natural topography of St. Kitts and Nevis makes it, visually, quite exquisite, captivating. Volcanic in origin, there are majestic blue-green mountains that tower along the center ridge of the island of St. Kitts and also in Nevis before sloping gently into the Atlantic Ocean and the Caribbean Sea.  In the other direction, countless pretty, pert, and small hills stretch one after the other, and away from the mountains, to form our southeast peninsula, with its countless bays, beaches, and breath-taking vistas.  And it is here, on our southeast peninsula, that The Park Hyatt St. Kitts will be located,” said Dr. Douglas.

He also highlighted the compulsory free education in public schools from Grades 1 through 6 at the primary level, in secondary school from forms 1 to 5 and also in the two-year tertiary level institution for all children.

“The quality of this education has enabled many of our outstanding students to gain admission to leading universities around the world.  This has a direct bearing on the profile of employees who are hardworking, skilled; they are our service providers, and business partners to be found in St. Kitts and Nevis, and were, from the start, a key component in our country’s long-range planning.  In addition, determined to compete in an increasingly globalized world, we have made computer proficiency an essential component of the classroom experience of every single child in primary and high schools in St. Kitts and Nevis as well,” said Prime Minister Douglas.

He said his government has also allocated thousands of acres of land to local farmers in order to stimulate and strengthen the natural symbiosis between tourism and agriculture.

“For over 350 years sugar agriculture was the main economic driver in St. Kitts and Nevis. In 2005 as a result of the turbulent world trading developments, we had to close our sugar industry and we have now turned to services lead in particular by tourism and hospitality services supported by financial services, information communication technology services, light manufacturing, specifically with regard to electronics and also diversified agriculture,” Prime Minister Douglas said.