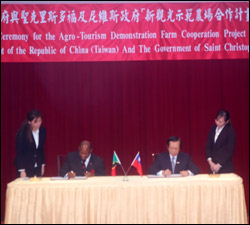 The Government of St. Kitts and Nevis and the Republic of China on Taiwan has signed an Agro-Tourism Demonstration Farm Cooperation Agreement enhancing bilateral cooperation on farmer training, improvement of agricultural cultivation techniques as well as tourism and green energy.

“I am indeed pleased with this development as it adds to the specter yet another area where our countries continue to be of mutual benefit to each other,” said St. Kitts and Nevis Prime Minister Hon. Dr. Denzil L. Douglas, prior to signing the Agreement with Republic of China on Taiwan Minister of Foreign Affairs and Chairman of the International Cooperation and Development Fund, His Excellency Timothy C. T. Yang.

Dr. Douglas noted that as both nations enter a new and deeper phase in their relations, Taiwan continued its history of being a consistent friend to the Government and People of the Federation.

“Saint Kitts and Nevis has also maintained its role in championing the causes for the government and people of Taiwan sometimes in the face of voracious opposition,” said Dr. Douglas, who pointed to the many ongoing projects that have enriched the lives of the citizens of the Federation.

“From education to agriculture to Information Technology, Taiwan and Saint Kitts and Nevis have partnered and collaborated and to a great extent accomplished the goals we have set for ourselves. We were highly appreciative of the young ambassador programme which made such an impact both in the Federation and in Taiwan, and we would welcome further cultural exchanges as we increase our people-to people contact and awareness of the cultural differences and similarities between our two nations,” said Prime Minister Douglas.

He said that the Taiwanese technical mission for agricultural cooperation is highly successful and the new Cooperation Programme that was just signed will add to the specter yet another area where both countries continue to be of mutual benefit to each other.

“We also thank your Government for its ongoing support of St. Kitts and Nevis at the Taipei International Travel Fair, providing us with an avenue to market our tourism product to your citizens and visitors,” said Prime Minister Douglas who noted that in this climate of ever increasing global economic challenge, “St. Kitts and Nevis actively strives to maintain a true sense of stability as we balance our national budget on one hand, while ensuring that our citizens can access the highest level of social services and infrastructure that we can offer.”