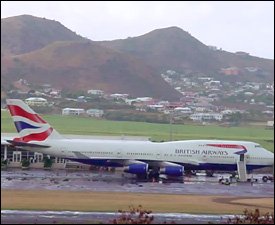 The Gatwick-London flight, which first stops at Antigua’s V.C. Bird International Airport, was diverted to Barbados after heavy rainfall flooded the airport runway.

Passengers were accommodated in Barbados and the flight is expected to operate to St. Kitts via Antigua on Wednesday afternoon.