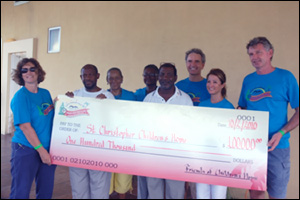 Check For EC $100,000 Is Presented
Photo By Erasmus Williams

The donation from the Friends of the Children’s Home goes towards the enhancement of the quality of life for the children in need.

Scores of persons of all ages converged at the Royal St. Kitts Golf Club for the 2K Family Walk and the 5K Run which was followed b y a Family Fun Fair and BBQ during which the young  participants met World Champion Kim Collins and enjoyed the bouncing castle and face painting.

In brief remarks to the participants, St. Kitts and Nevis Prime Minister thanked the organizers for the humanitarian gesture and appealed to the participants to exercise daily to stay healthy and productive citizens and residents.

The Children’s Home was constructed and established by the St. Christopher Children’s Home and Service League Association Limited, an organization which had its beginnings in September 1935.

The initiative for action relating to construction of the home came from the very energetic and big hearted West Indian named Mrs. Millie Neverson. It was in 1937 that Mrs. Neverson introduced the group then existing as the Service League, the idea of a Million Penny Scheme for the purpose of providing a building for neglected children.

The scheme was enthusiastically pursued  and it grew steadily over the years. The home was constructed and was officially opened on the 26th January 1950 with a family of six ““ a matron, an assistant and four children.

Up to 34 children and young people have been resident at the home at one time ranging from 4 years to 19 years. Children who are admitted to the home were mainly orphans, child abuse victims and neglected or abandoned children or those placed there by the Courts.

The Friends of Children’s Home is a volunteer organization which helps with emotional support for the children as well as to organize homework studies, outings and birthday celebrations to name just a small few.