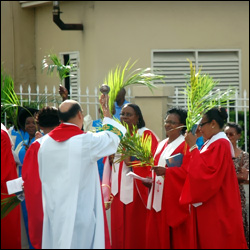 Christians in St. Kitts and Nevis on Sunday joined their counterparts in the Caribbean and further afield in celebrating Holy Week.

Congregations from the Zion Moravian Church, the Wesley Methodist Church, the St. George’s Anglican Church and the Immaculate Co-Cathedral attended a Palm Sunday Service at The Circus in downtown Basseterre organised by the St. Kitts Christian Council.

The Service began with Welcome Remarks by the Venerable Archdeacon Valentine Hodge of the Anglican Church, the Opening Prayer by Dr. Wycherley Gumbs of the Methodist Church and the Reading of the Gospel by Father Bernard Latus of the Catholic Faith, Rev. Hilton Joseph of the Moravian Church delivered s short address.

After the blessing of the palms by Father  Vicente Dominguez Gonzalez of the Catholic Church and Archdeacon Hodge, the Parish Priests lead their congregation up Fort Street and to their respective churches to continue to commemorate the Lord’s entrance into Jerusalem.

All churches have organised traditional events.

Holy Week continues Monday at the Catholic Co-Cathedral with the traditional day of recollection for all the Priests ending with the CHRISM MASS celebrated in the Co-Cathedral at 6:30 pm.

After the Mass a simple warm reception of goat water and/or fish soup will be held under the tent and all are invited.

Holy Thursday sees the celebration of the Lord’s Supper with the washing of the feet at 7.00 pm followed by the Adoration at Gethsemane until 10.00pm.

Holy Week begins with Sunday of the Passion of the Our Lord. Before 1955 this Sunday was known in the Roman Rite simply as Palm Sunday and the preceding Sunday as Passion Sunday. From 1955 to 1971 it was called Second Sunday in Passiontide or Palm Sunday.

To commemorate the entrance of the messiah into Jerusalem, to accomplish his paschal mystery, it is customary to have before Mass a blessing of palm leaves (or other branches, for example olive branches). The blessing ceremony, preferably held outside the church includes the reading of a Gospel account of how Jesus rode into Jerusalem humbly on a donkey, reminiscent of a Davidic victory procession, and how people placed palms on the ground in front of him. Immediately following this great time of celebration in the entering of Jesus into Jerusalem, he begins his journey to the cross. This is followed by a procession or solemn entrance into the church, with the participants holding the blessed branches in their hands.

The Mass itself includes a reading of the Passion, the narrative of Jesus’ capture, sufferings and death, as recounted in one of the Synoptic Gospels.

Before the reform of the rite by Pope Pius XII, the blessing of the palms occurred inside the church within a service that followed the general outline of a Mass, with Collect, Epistle and Gospel, as far as the Sanctus. The palms were then blessed with five prayers, and a procession went out of the church and on its return included a ceremony for the reopening of the doors, which had meantime been shut. After this the normal Mass was celebrated.

The days between Palm Sunday and Holy Thursday are known as Holy Monday (or Fig Monday), Holy Tuesday and Holy Wednesday (sometimes called Spy Wednesday). The Gospels of these days recount events not all of which occurred on the corresponding days between Jesus’ entry into Jerusalem and his Last Supper. For instance, the Monday Gospel tells of the Anointing at Bethany (John 12:1-9), which occurred before the Palm Sunday event described in John 12:12-19.

The Chrism Mass, whose texts the Roman Missal now gives under Holy Thursday, may be brought forward to one of these days, to facilitate participation by as many as possible of the clergy of the diocese together with the bishop. This Mass was not included in editions of the Roman Missal before the time of Pope Pius XII. In this Mass the bishop blesses separate oils for the sick (used in Anointing of the Sick), for catechumens (used in Baptism) and chrism (used in Baptism, but especially in Confirmation and Holy Orders, as well as in rites such as the blessing of an altar and a church).