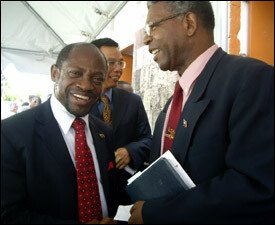 St. Kitts and Nevis continues to put the necessary checks and balances to ensure good governance with the appointment of its first Ombudsman in the twin island Federation.

“I am pleased to announce the appointment of His Excellency Ambassador Walford Gumbs to the position of Ombudsman of the Federation of St. Kitts and Nevis by His Excellency the Governor General His Excellency Dr. Sir Cuthbert Sebastian with effect from August 1st 2008,” Prime Minister Dr. Denzil L. Douglas announced at his monthly Press Conference on Wednesday.

He said the Office of the Ombudsman “will ensure that all of our citizens are given an opportunity to have their grievances with the Government’s services heard and resolved.”

“It will ensure the protection and enforcement of the rights of citizens of St. Kitts and Nevis, maintain a high degree of independence and objectivity, and will be staffed by a respected and competent professional people,” said Dr. Douglas.

Gumbs is a former Speaker of the National Assembly and former President of the St. Kitts”“Nevis Trades and Labour Union.