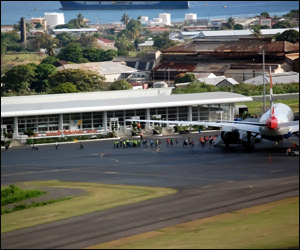 St. Kitts and Nevis‘ Minister of Tourism and International Transport, Sen. the Hon. Richard Skerritt, who was appointed to the tourism  portfolio in 2004 has moved direct incoming seat total from international carriers from 65,000 to approximately 132,000 per year; a 77 % growth from 2005.

Sen. Skerritt made the disclosure at the recent ceremony to inaugurate Seaborne Airlines flights to St. Kitts and to the Robert L. Bradshaw International Airport, the gateway to the Federation of St. Kitts and Nevis.

“When I took office in 2004, our international scheduled airlift was 85% dependent on the American Eagle Puerto Rico hub. The remainder of our direct international services was a once weekly US Airways Philadelphia service and a once weekly charter from the UK. That was it. Back then we had about 65,000 inbound scheduled seats and many of the tourists who came here could only do so on charter services, most of which have since either gone out of business or are flying on more lucrative routes,” said Minister Skerritt.

He said it critical to begin building a new scheduled air service infrastructure with excellent results.

“First, with the addition of three weekly non-stop flights by American Airlines from Miami in 2004, which grew to 5 flights in November 2005. We also moved the US Airways Philadelphia service to the more modern and strategically located Charlotte hub. Next, the service by AA was expanded with a new twice weekly non-stop service from JFK (New York) launching in November 2007, followed by new non-stop Saturday service by Delta Air Lines from Atlanta starting in February 2008.  By 2008, inbound international seat capacity had gone up by roughly another 43,000, over 65% growth in just a few short years,” said Mr. Skerritt, who was given the additional portfolio of international transport in February 2010.

He further pointed out that things changed dramatically in the latter half of 2008with the onset of the global economic recession.

“Beginning in the US and spreading throughout the rest of the world over the following years, the impact on stay-over tourism to St. Kitts and the rest of the Caribbean was felt strongly. The crisis negatively impacted consumer demand and resulted in a fall off in business for all tourism related developments and services. Airlift arrivals growth to St. Kitts & Nevis was set back especially badly from the 26-month closure of Four Seasons Hotel in October, 2008 which lasted until December 2010,” he said.

Minister Skerritt however noted that due to excellent relationships with air carriers, St. Kitts has fared competitively better than many other Caribbean destinations.

“While international carriers were cutting back their service from North America to many islands in our region, St. Kitts did not lose any flights.  In fact, demonstrating confidence in the growth and potential of our tourism sector, some airlines actually saw increases in service to St. Kitts, with American’s Miami flights becoming daily in November 2008 and Delta’s service increasing to twice weekly in December 2009.  Also in 2009, British Airways, began direct service from London Gatwick airport and added a second flight on Tuesdays that commenced in March 2010,” he said.

He pointed out that concurrently, mergers and consolidations, such as the mergers between British Airways and Iberia, Delta and Northwest, United and Continental to name a few, resulted in fewer airlines with fewer seats flying in an attempt to fly with fuller airplanes.

This he said caused many destinations to lose service or capacity, but again St. Kitts’ Robert L. Bradshaw International Airport survived that storm.

“In April 2013, when yet another airline merger loomed on the horizon, this time between AA and US Airways, we were impacted negatively by American Eagle ceasing its Puerto Rican operations altogether, taking away with it approximately 20,000 inbound seats to our destination. Luckily, with foresight, we had previously negotiated with American for the November 2012 addition of the first of our two new weekend overnight services on Friday and Sundays,” said the  tourism minister.

He said statistics show that these services have indeed captured most of the travelers previously connecting over San Juan as just this past November, American Airlines began operating two additional flights from Miami to St. Kitts, for a total of 11 weekly Miami flights, to accommodate market growth associated with the improving US economy.

“This has brought our direct incoming seat total from international carriers to stand at approximately 120,000 per year; a 77 % growth from 2005. Seaborne ‘s daily service from San Juan will now add another much needed 12,000 international inbound seats to our destination annually,” said Minister Skerritt, a two-term senator, who was given additional responsibility for international trade, industry and consumer affairs in February 2013.