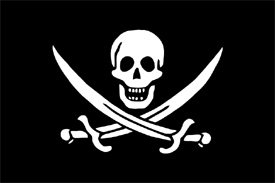 Pirates Get Away With Their Plunder…..Again

An Egyptian ship flying the St. Kitts and Nevis flag has been released after payment of a one million dollar ransom.

An Agence France Press (AFP) story out of Mombasa, the Kenyan capital quotes the captain as saying that the ship was released last week after two months in the hands of Somali pirates following the payment of one million dollars (775,000 euros).

“The owner of the ship, Abderrahman al-Awwa, negotiated with the pirates who demanded six million dollars but they finally settled for one million dollars,” Mahmud Swidan told reporters in Mombasa.

The MV Blue Star and its Egyptian crew of 28 seamen were freed on March 4 and docked in the Kenyan port earlier Friday.

Somali pirates marauding the Gulf of Aden, a critical channel for world maritime trade where thousands of vessels bottle-neck into the Red Sea on their way to the Suez canal each year, attacked the Blue Star and its cargo of 6,000 tonnes of fertiliser on New Year’s Day.

“I thank God I am alive. A bullet fired by the pirates missed me by a whisker,” Swidan said.

The Egyptian-owned ship was flying the flag of the Caribbean island territory of St. Kitts and Nevis when it was hijacked.

Since the surge in hijackings by ransom-hunting Somali pirates in 2007, most attacks have been carried out in the Gulf of Aden by groups operating out of the northern breakaway state of Puntland.

Increased navy presence in the area however has encouraged some pirate groups to hunt ships further out at sea.

Despite a slight drop in attacks in recent weeks, Somali pirates still hold at least nine ships and more than 130 crew for ransom, Mwangura said.