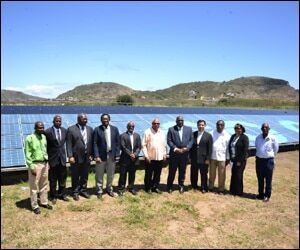 The St. Kitts – Nevis Government continues its renewable energy thrust with the handing over ceremony of the solar farm located in the vicinity of the Frigate Bay Road on March 24, 2016.

The St. Kitts Electricity Company Limited (SKELEC) now officially has responsibility for the operation and maintenance of the solar farm which has 500 kilowatts capacity. The project which is valued at US $1.55 million is a collaborative effort between Taiwan) and SKELEC. Taiwan contributed US$800,000 and SKELEC contributed US$750,000.

Speaking at the ceremony, Minister of Public Infrastructure, Posts, Urban Development and Transport, Honourable Ian Patches Liburd, said that as a “Team Unity Government, we have embarked upon a journey with a deliberate initiative to do all that is within our capabilities, be they financial, social and political or otherwise in order to ensure that the Federation of St. Kitts and Nevis attains a level in our renewable energy thrust whereby we will not only have energy efficiency but energy conservation and energy security as well. This we believe is critically important as we strive for sustainable development and economic growth.”

Minister Liburd said the goal is that by 2020 near 100 percent of the electricity supplied in the country will be produced from renewable energy, a goal which he said was ambitious but attainable. He also highlighted that with adequate and modern technology options and equipment, it will help in reducing losses and improving efficiency.

“Adequate programmes for promoting the use of renewable energy sources in all sectors and all energy uses such as water heating, cooling, transport, industry uses etc. have to be studied and later implemented by our government,” he said, while noting that the government had already introduced and passed the requisite legislation in December of 2015 to accommodate the commercial use of all its renewable energy resources, be it wind, solar or geothermal.

Minister Liburd further highlighted that the energy policy of the Government of National Unity was built on three pillars: one, energy security, where the administration believes that there must be energy security if it is going to continue developments and show economic growth; two, energy access, where every single citizen in the country must have access to affordable energy and affordable electricity irrespective of their social status; and three, energy environment, where all issues related to climate change are being addressed.

Chief Executive Officer of SKELEC Cartwright Farrell said that this was the electricity company’s first venture into renewable energy. He outlined that the solar farm has 500 kilowatts capacity from around 2000 solar panels on the ground which feed into inverters which convert the energy from direct current to alternating current and from there they are being stepped up in voltage and fed into the grid. He emphasized that through internet connection, the solar farm can be remotely monitored to see the power generated in real time by the hour, by the week and by the month. According to him the highest month of generation since the solar farm has been connected to the grid, has been January where 69,000 kilowatts hours were generated.

“We are taking small steps with only a 500 kilowatt solar farm so that once we put that in we can consolidate our stability before we can make another step. Our responsibility is to ensure a stable and reliable power system throughout the transformation of the industry,” Mr. Farrell said, while adding that a responsible energy company must move with the times and highlighting that with the reduction in fossil fuels and the increase in renewable energy, there will be a minimizing of the fuel surcharge which will lead to lower electricity bills.

Also, he said that “Go Green” was emblazoned on the panels to show intent that SKELEC and the direction of renewable that the country is taking are of one accord.

Ambassador of Taiwan His Excellency George Gow Wei Chiou stressed the cooperation between St. Kitts and Nevis and Taiwan in the area of renewable energy. He said that this is “another milestone” for St. Kitts and Nevis. His Excellency Chiou underscored the point that with 2000 kilowatts per hour, SKELEC can save over eight (8) million dollars in fossil fuel every year. He also stressed that renewable energy has many benefits over fossil fuels in alluding to climate change and global warming.