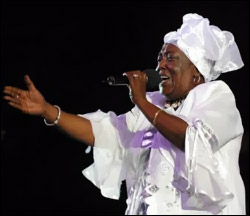 Calypso music’s biggest female icon, Singing Sandra, was announced today as a special guest performer at this weekend’s much anticipated and talked about Miss Personality and Marvellous Queen and Ring Bang Calypso Show. Born Sandra Des Vignes, the talented singer is well known for her nurturing approach and maternal counsel to Caribbean. “I am very excited about performing in St.Kitts,” Sandra said during a phone interview.

Sandra has come a long way since her debut at Sparrow’s Young Brigade tent in 1984.

From taking the calypso stage against the wishes of a concerned father to her rise to royalty status in the genre, the two-time national calypso monarch continues to defy all odds. While at Young Brigade she copped both the local National Calypso Queen and St Maarten Queen of the World titles in 1987 with Sexy Employees, more popularly known as Die With My Dignity. The song mirrored Sandra’s image and spiritually strong moral standing and was an immediate hit with women in society who identified with the images of male chauvinism in the workplace. “”˜You could keep your money, I go keep my honey and die with my dignity’

In 1991, she took her career a step further with the formation of the United Sisters quartet that featured, along with Sandra, calypsonians Marvellous Marva, Tigress and the now-deceased Lady B. The group, all graduates of the Best Village programme, was a hit with Caribbean calypso fans and represented feminine strength in a time when women were either too afraid or timid to hold the spotlight. They went on to win the Trinidad National Song Festival and placed second in the Caribbean Song Festival that same year with “Ambataila Woman” penned by Lady B.

United Sisters followed up on that success with the 1993 Carnival hit “Whoa Donkey” before disappearing from the scene.
Sandra, meanwhile, moved on to greater accomplishments and became the second woman to win the national Calypso Monarch in 1999, an achievement preceded only by the legendary Calypso Rose in 1978. Singing “Song For Healing” and her trademark rendition, “Voices from the Ghetto”, she created history in what was definitely the year of the woman with Sanell Dempster taking the Trinidad Road March crown, with River, in what was the first time women held both Trini carnival titles.

Sandra showed she could also hold her own on the party scene with her 2002 hit collaboration with International Soca Monarch Bunji Garlin entitled Lie Lie. The song, which was an immediate hit with the soca faithful, took a look at people of all walks of life and the charades they play. In 2003, Sandra again copped the National Calypso Monarch crown becoming the first woman to hold the crown twice with For Whom the Bells Tolls and the powerful Ancient Rhythms. Sandra also created history in the “˜90s, beating some of the strongest male bards in the region to cop the coveted Carifesta V Calypso Monarch title.

On the personal front Sandra added the name Millington to her title when she wedded Tobago-born Stephen Louie Millington of Pinto Road, Arima, in 2004. “It’s a bit personal, my relationship, so I rather not elaborate but I love him dearly and he loves me too because he has not left me yet,” she joked.

Always regally dressed in African clothing, Singing Sandra is the embodiment of the Afro-Caribbean woman. A proven pillar of strength and loved by the people she has willingly reciprocated that love.