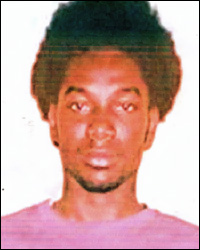 Another Man Wanted By Police For Tour Bus Robbery

Members of the Royal St. Christopher and Nevis Police Force have launched a massive manhunt in search of Curtis Long of Sandy Point. Officers in the District “B” area have in their possession seventeen (17) warrants in the first instance for the arrest of Long. Long has been accused of being involved in the November 14th 2010 armed robbery of a number of persons a board a tour bus at Sandy Point. The police are therefore seeking the assistance of the general public in the locating and capturing the named prisoner. Long is considered armed and dangerous, persons with information are asked to contact the nearest police station. Investigations are ongoing.

On February 25, 2011 police at Basseterre received a report of a shooting incident at the compound of the Technical and Vocational section of the Clarence Fitzroy College. Police from the Special Services Unit, Anti-Gang and the Criminal Investigations Department responded immediately and their investigations revealed that the Irish Town Primary School Annual Sports Day was in progress at the play field adjacent to the Irish Town Primary School when a group of young men were seen to be in an altercation. The altercation took them to the compound of the Technical and Vocational sections of the Clarence Fitzroy College when soon after a number of gunshots were heard. The crowd at the Sports Day dispersed causing the Sports Day to finish prematurely, however no one have been reported injured nor no damage to property. There are no suspects in police custody at this time however police are in search of a number of persons of interest. Investigations are ongoing.

On February 28, 2011 police at Basseterre received a report of a shooting which had occurred on Pond Road in the vicinity of the Newtown Government Nursery at approximately 1:55 pm. Police from the Special Services Unit, Anti-Gang and the Criminal Investigations Department responded immediately and their investigations revealed that Taxi Operator Kenneth Adams of Manchester Street, Sandy Point was driving his white Toyota taxi bus T-5920 from west to east when he heard a loud bang. Adams immediately stopped and he realized his front windshield was shattered; he also received a bruise from the shattered glass. Officers from the Crime Scene Department processed the scene and collected items of strong evidential value. There are no suspects in police custody at this time however investigations are ongoing.

On February 27, 2011, police at Basseterre received a report from an anonymous caller concerning an altercation which had occurred at Pond Road at approximately 9:25 pm. Police visited an area at Pond Road in the vicinity of the Spanish Bar and made enquiries but was unable to get any useful information. Officers then visited the JNF Hospital and interviewed a Jesus Skelton who was nursing a serious wound to his left wrist. Skelton reported that his wrist was chopped by a man who during an altercation. Skelton underwent emergency surgery and is now warded at the JNF Hospital in serious but stable condition. There is one person in custody assisting the police with their investigations but police are in search of a number of other persons of interest in this matter. Investigations are ongoing.