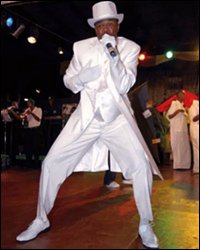 An exciting set of Eliminations has just culminated and the long awaited sixteen (16) of semi finalist are ready to continue the battle. It all started on Sunday December 6th, 2009 with twenty (20) Calypsonians from the Tent of the Legends Band and continued with 24 Calypsonians from The Proud Sounds Calypso Tent, backed by the Grandmasters Band on Thursday, December 10th 2009.

The evening of December 6th started off with the nights’ MC Sandra B, introducing Queen Kibie to sing Job Vacancy, a tune that really hit us “SMACK In The Middle” and included King Socrates, who needs no introduction and Calypsonians like Blazer, Turkey Killer, Provoker, King Dwightie, Big Edwards formally Slim Edwards, reigning Best of the Rest winner Queen Singing Angie, King Astro and Baker out of Nevis, much improved and crowd favorite Singing Pearline, Magoo, Lord Kut with another hard hitting composition, Zackie who as a first timer impressed the large audience with his tune “It’s My People”, then youngest Calypsonian participating in the Eliminations process – young Mighty J and much more.  There were simultaneous blessings, when King Socrates who operates the Legends Band (along with Nigel “Numpy” Williams) sang his piece called “Let Justice Rain”.

The night of Monday, December 7th was delayed a bit by some more blessings, leaving the crowd to wonder if it was a sign of something magical but, it was not to be. Some fifteen (15) Calypsonians was scheduled to perform and at the end only eleven (11) Calypsonians took part.  The MC of the Proud Sounds Calypso Tent, Calypso Reggie explained that, last minute rescheduling was the cause of the mix up that led to some Calypsonians’ no show. Mondays Eliminations was rescheduled from Tuesday 8th, December 09. Nonetheless, it was Lord Matt who opened the batting with his timely tune called “Badness Out Of Style” and Jungle Lion followed with “Same Old Slave” – a song that seems to utter we will always be slaves no matter what we accomplish. Honesty was followed by newcomer Sha Angel paved the way for what turned out to be a blistering composition from Queen Singing Jackie called “Scares To Stars”.  We then had Shango followed by Mr. Various ““ another newcomer with “O Land of Beauty”. The penultimate Calypsonian was Unexpected who did what was expected of Unexpected, when he brought the evening to an anti climax.  Before Unexpected we had Big Lice with another hard hitter of the Eliminations called “No Apology”.  RockaFella then brought down the curtain on the night’s segment of the Eliminations with “Wuk E A Wuk”.

The National Carnival LIME Calypso Monarch Competition has now taken shape with the conclusion of Eliminations. The evening of Thursday December 10th, 2006 was this year’s last Eliminations and saw Abba Lively taking the first pass with his tune “Half A Hug Head” and then Hollywood paid tribute to many of the Calypsonians who have hung up their Calypso Jersey”.  Quantash with Murder Cry, Godfrey who was “Singing For His Supper”, Ayatollah followed him with “Save The Youths” and King Dis N Dat came on with “A Want A Bail Out”.  Culturama King, King I-Sour Sop performed “Time Tell It” and the night ended with our very own Diego with “Wha You Day Pon”. Other Calypsonians on the night were LALA, Take Over, Pa-ULA and Rollensha with “Crime Rate” was yet another newcomer who impressed.
The Eliminations produced the following Calypsonians who will be taking part in this year’s