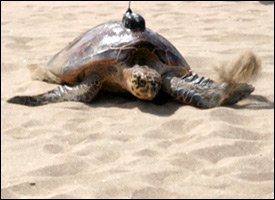 The third annual Sea Turtle Camp organised by the Four Seasons Resort Nevis (FSRN) and the Nevis Turtle Group (NTG) saw its first highlight on July 22, when it witnessed the tagging, naming and releasing of a Hawksbill sea turtle into the ocean, on the south side of the Four Seasons pier on Pinney’s Beach.

The turtle was found while nesting around 11 PM on Monday July 21, at Jones Beach by Founder and President of the NTG Mr. Lemuel Pemberton.

Supervisor of the Kids For All Seasons (KFAS) Department at FSRN and coordinator of the Sea Turtle Camp Mrs. Barbara James, spoke of the importance of finding a turtle to the participants of the camp.

“It is very good that on the first day of the Camp the kids get to see the turtle that we found last night on Jones Beach and see it being released,” she said.

Mrs. James also gave an overview of this year’s Camp.

Executive Director of the non-profit organization Caribbean Conservation Corporation Mr. David Godfrey who was in Nevis to assist with the turtle awareness initiative, witnessed the capture of the turtle and reflected on it.

Hibiscus Heading Out To Sea 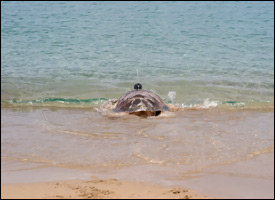 “We found the turtle when it was nesting and so we let it finish nesting.  She got her eggs in the sand and when she was all done and getting ready to head back to the water at that point we detained her and put her safely in the box.

“This morning we’re applying a satellite transmitter to her back.  It will allow us to monitor the turtle’s migration for at least two years,” Mr. Godfrey said.

Mr. Pemberton who was on hand to witness the naming, tagging and releasing of the turtle, spoke of the current happenings in the Caribbean as it related to turtles.

“There is a programme we have in the Caribbean where we are trying to find out if the sea turtles are related to each other that nest on the different islands.

“There is one student who is presently at the University of the West Indies Cave Hill Campus in Barbados and he is working with sea turtles from St. Kitts and Nevis, Grenada and Barbados to see if there is any kind of interrelationship between these turtles,” Pemberton said.

The annual Sea Turtle Camp was initiated to sensitise the island’s children on the importance of caring for sea turtles.  It targets children aged nine to 12 years.   During the Camp they are engaged in lectures, PowerPoint presentations, quizzes, art and craft and games.

Two Nevisian turtles along with six others from Panama, Florida and Costa Rica would partake in a Caribbean launch of Tour de Turtles on August 01, where they would compete in a 2.620 km marine marathon to continue to raise awareness about the threats currently being faced by turtles.

The turtle was named “Hibiscus” by the participants of the camp.

Persons would be able to track the location and range of movements of “Hibiscus” by logging on to www.cccturtle.org through the GPS satellite transmitter that was placed on it during the tagging process.

General Manager of FSRN and Regional Vice President Mr. Andrew Humphries along with the island’s reigning Culturama queen Ms. Shannecia Demming  who is also an employee at the hotel attended the event.