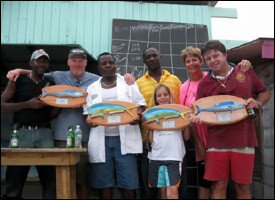 Well since the most I know about fish is how to cook them…I will let Tracy Rigby’s email to me explain the outcome of this year’s fishing tournament in Montserrat, West Indies.

“The Sea Brat departs from the Montserrat 14th Annual Sports Fishing Tournament at 6:30 A.M.  First two Wahoo caught off of South Point at 8:00 am.   1) 40 lbs Wahoo caught by Ian Gonzaley. 2) 31 lbs Wahoo caught by Tracy Rigby.  The next fish was a 7 pound Mahi (Dorado) caught by Chantal Rigby (10 years old).  The next 3 fish were caught at about 2pm on the North side of Redonda.  They were all Wahoo 1) 11 lbs Caught by Ian 2) 27lbs caught by Stanley  3)  38.5 lbs caught by Lee Hayles. We must mention Kevin Jeffers who was chief and champion Gaffer & Captain Julian Rigby who was cheif and champion navigator.  The crew of Sea Brat were a happy bunch we walked away with 4 trophies.  Largest Wahoo, Largest fish by a female, Most Fish Caught and Champion Boat.

The last time the Sea Brat was in Montserrat was in 1995 when we won champion boat.  I must thank the organizers in Montserrat for a for a fun and well attended tournament . In all 14 boats attended.  I must also mention that regardless of the conditions in Montserat with the volcano, morale was high, and the friendliness of the residents was wondeful.  Crime was nonexistent, but what struck me the most was the cleanness of the island no trash or litter thrown on the side of the road or in the ghauts.”

When visiting the island of Nevis, be sure to check out Tracy and Julian’s wonderful restaurant…The Gallipot, which by the way had a nice write up in Fodor’s 2008 Caribbean Guide.  Oh and if you would like to do dom sport fishing while in Nevis, obvioulsy there is no choice but to choose the Champion Boat “Sea Brat” from Nevis Water Sports.