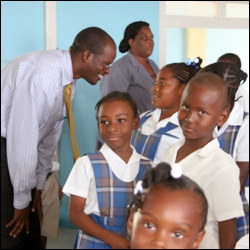 Patrice Nisbett With Students at The St. John’s Primary School

He said his decision to launch the scholarship, was an attempt to sustain the tradition of excellence exhibited by students who attended those learning institutions over the years.

In a recent interview with the Department of Information, Mr. Nisbett, a former student of St. James Primary who is also the Attorney General and Minister of Legal Affairs and Justice in St. Kitts and Nevis said his gesture should be considered as an investment.

“I don’t want to see it as if I am giving back, I want to see it as an investment in the nurturing of young minds who will continue to grow in education; to understand that more than anything else in life, education will guarantee and secure their upward mobility,” he said.

According to Mr. Nisbett, the solid foundations at the primary education level had been enjoyed by many successful persons in the Nevis community and each student selected by the individual institutions would receive a cheque of EC$1,000.

“At the VOJN Primary School graduation, I launched the scholarship which I had indicated on my visit to the school prior, I would have done in honour of Mr. Andrew “Blues” Jones. The family was good enough of Mr. Jones and the contribution that he made not only to the Combermere, Liburd Hill and Barnaby areas but the contribution he made to Nevis in general.

“Mr. Jones represented Nevis in football so he was not only an academic but he was also an individual who was actively involved in sports in Nevis and was able to rise to the highest level. So that was done in memory of him and we were able to deliver the cheques to the two primary school students,”

He said the scholarships for the remaining schools had not yet been named in anyone’s honour but the public could rest assured that they would not be made in his name.

As to the scholarship awarded, Mr. Nisbett explained that St. Thomas Primary School student had already been chosen but he was awaiting word from the authorities at the St. James Primary School, on who the selected student would be.

“I am sincerely hoping that the name would be brought forward before the new term commences so that the scholarship can be handed over to the students at that time.