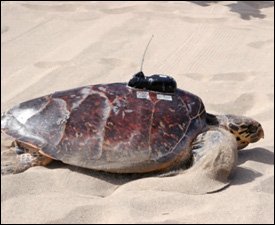 The biodiversity of the Federation, including the sea turtle population, is under threat due to the increase in illegal sand-mining that is taking place.

Due to these concerns, the Ministry of Sustainable Development and Environment organized a media tour which was coordinated by Conservation Officer Andy Blanchette.  It was designed to inform about damage already caused by illegal sand mining and future disastrous consequences if this activity continues.

Sea turtles use the sand to nest their eggs and are among the animals for which the beach is a means of survival of the species.  As such, Austin “Jay” Farier represented the St. Kitts Sea Turtle Monitoring Network (SKSTMN) at the tour.

“Some sea turtles do prefer to nest closer to the vegetation,” Mr. Farier informed. “There are other sea turtles that prefer to nest in the middle of the beach.  Once a nest is washed over at least three times by sea water, all the eggs are pretty much finished.”

This point was reinforced by Director of SKSTMN Dr. Kimberly Stewart who further noted to the St. Kitts and Nevis Information Service that tractors and other  heavy machinery used for sand mining can also destroy turtle eggs.

“If they [heavy equipment] ride over a sea turtle nest, they can compact the nest and cause puncturing of the eggs if there are sticks or any debris,” Dr. Stewart explained.  “Also sea turtle eggs have tiny pores in which they have air exchange in which those tiny embryos can breathe and the compaction of the sand also prevents them from having that little air pocket and they can suffocate.”

The Director of SKSTMN added that heavy equipment can dig up turtle nests, nesting females can fall into the large pits left behind when the sand is removed and the hatchlings may not be able to find their way to the sea.  Director Stewart noted that three species of turtle, specifically the leatherback, hawksbill and green turtle nest mainly on the Cayon, Keys and North Friars Beaches in St. Kitts.  She explained that her Network tags and takes other research data from the turtles, which is then reported back to the Marine Tagging Centre in Barbados.  Other activities include escorting locals and visitors on turtle watches.  Dr. Stewart further revealed that SKSTMN plans include the creation of an interpretive center.

“It’s a small little station off the beach to blend in with the environment,” Director Stewart explained.  “So we’ve been trying to go through the Department of Sustainable Development to get approval for that “¦ where we can educate about this local environment on the beach and have protection for us and eco-tourists.  We bring out over 300 tourists a year to see these nesting turtles and we also provide jobs for that, so we’re trying to increase that capacity.  We are seeing more and more “¦ repeat visitors who come back to see another leatherback ““ which puts us under some pressure because these turtles aren’t always predictable.”

The SKSTMN Director explained that another important activity is a tag and release programme which takes place during harvesting season.  The fishermen catch the turtles, assist with their tagging and are then paid a sum depending on the weight of the turtle.

Dr. Stewart emphasized that her Network has a very close relationship with the Fisheries Department while pointing out that the Department’s regulations regarding sea turtles stipulates that sea turtle nests and sea turtles that are nesting should not be disturbed under penalty of a fine of EC$5,000.00.  She added that SKSTMN has to get a permit during the nesting season to conduct the turtle watches that take place from 8:00 p.m. to 6:00 a.m. nightly from March to July each year.

The SKSTMN Director pointed out that during their night excursions, the turtle watchers heard birds along the beach and further investigations revealed them to be least terns and wilson’s plovers.  She explained that these birds are listed as threatened or endangered in the Americas.  Dr. Stewart said that the birds are also adversely affected by sand-mining because they make scratches in the sand and lay two eggs which are exposed during their nesting season, if the sand is removed or disturbed, the eggs and baby chicks are destroyed.

Megan Jacobi, a SKSTMN Research Assistant, outlined that residents who live along the Keys and Cayon Beach areas can help the nesting turtles by turning off lights when rooms are not in use, since this can disorient the turtles; removing beach furniture so it does not obstruct the turtles causing them not to lay, as well as taking garbage with you after spending time at the beach.  Residents can also call the Sea Turtle Hotline at 764-6664 or email skturtles@gmail.com if any nesting activity is observed, or simply for further information.