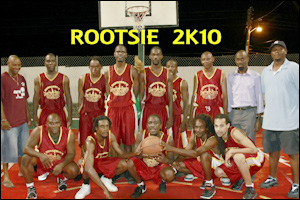 For the 2nd time in 3 years the Horsford’s Rootsie has been promoted to the Big League, the SKABA Premier Dision. The Rootsie sealed their promotion with a very convincing victory over their SKABA “A” division playoff semifinals opponents the Blue Devils. It was a very one-sided affair in the SKABA Relegation Zone round robin match in which the Devils suffered a crushing 89-66 defeat thus removing any chance of the team being promoted to the Premier Division.

The Zone was instituted during the last season to ensure that the relegation and or promotion of teams are truly warranted and deserved.

“The SKABA relegation Zone was set up to ensure that teams that are promoted to the Premier division are really Premier quality teams,” said SKABA General Secretary Wallis Wilkin. “The way the zone is set up is that the 6th and 7th seeded Premier division teams play along with the 2nd and 3rd placed “A” division teams to decide which 2 teams of the 4 are truly of Premier Division quality or standard. Based on the results the Horsfords Rootsie have proven that they are a Premier quality team with their wins over Cayon and “A” division rivals the Blue Devils,” Wilkin Continued.

Rootsie will join their “A” division finals opponents and division playoff champions the Village Tickers in being promoted to the elite Premier Division.

“I am extremely proud of the team and the immense dedication and effort of the  players, said Rootsie Head Coach Dwayne Sturge. We had our ups and downs during the season as with any team SKABA but we generally played well and we certainly proved both during the season as well as in the playoffs and the relegation zone, that we are indeed a Premier division quality team,” Sturge continued.

Ghetto Roots Club Manager Wallis Wilkin also commented on the success of the Team and organization.

“I must say also that I am proud of the entire Ghetto Roots Organisation which generally had a relatively successful year,” said Ghetto Roots Club manager Wallis Wilkin. “Although we did not reach the Premier Finals we were semifinalists and our “A” division team was a finalist in their division. In addition The Clubs female team Captain Tenielle Lapsey was awarded a scholarship to a US college so our organization has had a very successful and commendable season,” Wilkin Continued

This will be the 2nd time in just 3 years that the Horsfords Ghetto Roots Basketball Club will feature 2 Premier Division teams. The Club has been the only basketball organization to feature 2 teams in the Premier Division and is the first to do it on at least 2 separate occasions.

In 2009 the Ghetto Roots Basketball Club was the only club to have a team in all 4 divisions of SKABA.