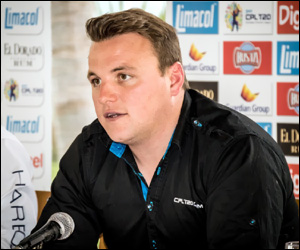 The announcement was made on Tuesday (June 10) by CPL Chief Executive Officer Damien O’Donohoe at a press conference at the Pavilion Private Club, Christophe Harbour. The concert will be held on August 15 ““ the night before the final cricket twenty20 match – at the Warner Park Football Stadium.

Thirty games will be played over 37 days of the tournament which begins officially on July 09, 2014. The semifinals and finals will be held in St. Kitts from August 07-16.

Minister of Sports Honourable Glenn Phillip stated that he was excited by the way the event is shaping up as the CPL T20 is very important for St. Kitts and Nevis.

“This journey began about a year ago when we began negotiating with the CPL to have [matches] here in St. Kitts and Nevis,” he said. “We intend to host great matches in St. Kitts – great atmosphere, like my good friend usually says we are going to have great calypso cricket.”

A number of local performers will share the spotlight at the concert. The names will be released later.