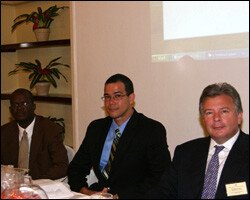 A regional legal and financial expert believes that while the Caribbean continued to stay abreast of best and compliance practices, it must be aware of the wider global issues that were going to affect the financial sectors of the region’s economies in the near future.

He said the theme of the conference reflected an appreciation of a key opportunity to take stock of where the Caribbean effort in Anti-Money Laundering/ Combating Financial Terrorism (AML/CFT) was after 17 years.

Mr. Sykes acknowledged a number of hurdles over the years but noted that there were looming challenges which would have to be tackled on a regional basis to protect the regional sectors.

“It is important that we look at these challenges regionally because international perception/ press does not usually distinguish between Nevis/British Virgin Islands/St. Lucia etc.

“Whilst jurisdictions with international financial services offerings are competitors, failures in one jurisdiction can and will have contagion and reputation risks for neighbouring states,” he said.

Mr. Sykes also used the occasion to commend the Nevis Financial services for its 25th anniversary citing that the milestone signalled a significant movement in the development of the financial services industry on Nevis.

“Successful development over 25 years points to a great deal of work to build financial products, build client relationships and to build a regulatory framework that not only facilitates business but that protects the reputation of the state and the sector.

“That’s a massive investment of money and effort. The authorities and the players in the industry are to be congratulated on meeting this memorable milestone,” he said.

Mr. Sykes, who acted as the financial examiner in the Federation’s last Mutual Evaluation that was presented to the CAFTF Plenary two weeks ago, said he was familiar with the main features of St. Kitts and Nevis’ framework.

They explained that the team observed a comprehensive legal framework which sought to carefully track the international best practice standards; dedicated and hard working regulatory professionals, many of who multitasked, wore several hats and strived to make the most of precious resources in the most effective and efficient manner.

“Our interface also evidenced strong governmental support for the sector. One striking factor to me was the fact that the Authorities took the findings of the report seriously, strongly defending positions regarding the strength of the framework but also looking with a critical eye to the findings and committing swiftly to those corrections that were valid and could improve the system.

“The process was very positive and collaborative. My participation here is a continuation of this collaboration. I also came away from the Evaluation mission with an impression of financial sector professionals who were well aware of the need for a culture of compliance,” he said.

My. Sykes referred to the Seminar as one with a growing reputation and the strong turnout of professionals to the one day event was testimony to that fact.