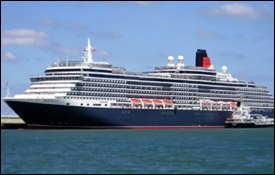 The 90,000 tonne Queen Victoria, which has a capacity of 2014 passengers and 900 crew members, will dock at Port Zante, on another leg of its 22-day Caribbean Holiday Cruise.

The ship has been named in honour of Britain’s Queen Victoria and passengers disembarking will see a monument “dedicated to her memory by the people of St. Kitts in  A.D. 1902,” which is engraved on the memorial at the round-a-bout at Baker’s Corner.

Its original home was at the round-a-bout near the Cardin Home but was relocated to its present site in the late 1960’s.