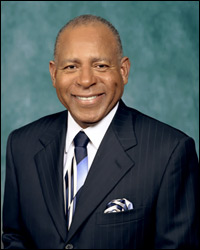 The visit by the Trinidad and Tobago Prime Minister follows a meeting in Port of Spain, at which the leaders of four CARICOM countries declared their intent to establish a political union by 2013, insisting that their move would not be detrimental to the wider regional integration movement.

This declaration also outlined their commitment to accelerating the establishment of a CARICOM Single Economy by 2011.

A joint communiquÃ© issued at the end of the one-day session that was also attended by the Foreign Minister of Barbados, Chris Sinckler, and his Guyanese counterpart, Carolyn Rodriquez, said that the meeting had also taken note of the difficulties which have arisen in progressing towards the establishment of the CSE and the decision of the Organisation of Eastern Caribbean States (OECS) to establish an economic union by 2009.

“The Prime Ministers of Grenada, St. Lucia, St. Vincent and the Grenadines and Trinidad and Tobago signed a Joint Declaration to establish a framework for closer cooperation towards the achievement of the single economy by 2011 and appropriate political integration by 2013,” the communiquÃ© said.

“The Prime Ministers and Foreign Ministers also resolved that no initiative associated with the implementation of this Joint Declaration would undermine the Single Market or economic cohesion established by the Revised Treaty of Chaguaramas.

“Participation in this framework is open to all Member States of the Caribbean Community wishing to commit to the achievement of the single economy and appropriate political integration within indicative timeframes,” the statement added.

It noted that former St. Lucia prime minister and former University of the West Indies senior lecturer, Professor Vaughan Lewis, and Trinidad and Tobago diplomat Dr. Cuthbert Joseph had been “mandated to prepare a study by the end of 2008 regarding achieving the modalities which have been set.”

“The Joint Declaration is a statement of intent, which is subject to ratification by the respective Cabinets and the duties identified are purely indicative,” said the communiquÃ©.