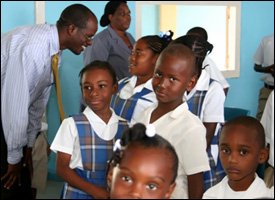 Students of the St. James and Violet O. J. Nichols Primary Schools received a lesson on the importance of the Commonwealth of Nations and what the Organisation offered to Small Island states like Nevis and St. Kitts and Nevis.

Federal Parliamentarian and Legal Advisor in the Nevis Island Administration (NIA) Hon. Patrice Nisbett told them on Monday – Commonwealth Day ““ during a brief address to mark the Commonwealth’s anniverrsary, that membership in of 53 sovereign states organisation offered a voice to their island.

“Small Island States are not immune from what is exploding in the rest of the world”¦It is because we are a part of the world andd are affected by what goes on in the world that our inclusion in the Commonwealth is so vitally important.

“This body gives us a forum whereby we can influence the world in which we exist, a forum that is becoming increasingly important as our world changes around us. As a nation we have an opportunity where we can share ideas, make our thoughts count, make decisions that not only secure our future but also preserve that of other countries,” he said.

However, Mr. Nisbett noted the changing world environment and stressed on the need for the Organisation, to reinvent itself to reflect the concerns and needs of today’s nations, generation and that of the future.

The Parliamentarian further noted that nations were being challenged today as never before and security had become a leading matter.

“We live in a world where we cannot let our guards down; where we must send strong messages to our enemies that w e will not tolerate any threat to our democracy and that world peace and our freedom is a legacy we want to leave for future generations.